MIDDLEBURG, Va.--Last year's Timber Horse of the Year Doc Cebu and Eclipse Award winner Mr. Hot Stuff and runner-up All the Way Jose were all beaten in Stakes at the Middleburg Spring Races on April 21, while Jonathan Sheppard saddled two winners to increase his lead in Trainer - Races Won to seven wins over four trainers with three wins apiece. 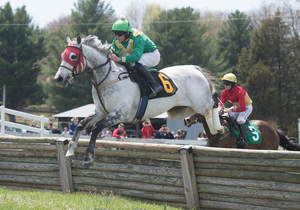 In the $30,000 Middleburg Hunt Cup Timber Stakes, Gerard Galligan on Irvin S. Naylor's Super Saturday, trained by Kathy Neilson, took advantage of a speed duel that involved Doc Cebu to come from behind and win by 2 1/2 lengths.

"We got off to a good start," said Sheppard of his Leading Trainer status, a position the Hall of Fame trainer is familiar with, having won the Trainer - Money Won title 24 times before Jack Fisher began to take over.

SHEPPARD WON two races at Middleburg, but just not with All the Way Jose.

"Plus, he was giving a lot of weight to the winner," said Sheppard. "He was giving the winner and the third placed horse 16 pounds each, I think, and six to the second placed horse. But he ran well, he just got tired at the end. Hopefully, he will move forward from here. All in all, we were happy with him."

Rosbrian Farm's Zanjabel, trained by Ricky Hendriks and ridden by Ross Geraghty, finished a closing second to Lyonell in the Temple Gwathmy, with Michael A. Smith's Mercoeur, trained by Leslie Young and rideen by Shane Crimin, who had led most of the way, holding on for third,

"IF THERE had been betting at Middleburg, we probably would have been 25 to 1," said Neilson of her horse's chances in the Timber Stakes.

Super Saturday won by 2 1/2 lengths over Smith's Le Chevalier, trained by Julie Gomena and ridden by Doyle, with Charles C. Fenwick's Doc Cebu, trained by Fisher and ridden by Frost, finishing third, another 18 lengths back.

She said Super Saturday benefited from a speed duel between three horses at the start of the  3 1/4 mile race.

"This horse has been doing very well," said Neilson. "He was second in the New Jersey Hunt Cup last fall. Gerard sat fourth in this race and went to the front three fences from home."

"I give a lot of credit to Gerard," she said. "This is a quirky, difficult horse to deal with. I've had him since he was 3. He'd like to run off every time you sit on him."

"That worked for him when he started over timber, and then he figured he could quit at a fence when he was in front," said Neilson. "But he's really strong to ride in behind."

"In the Maryland Hunt Cup, he jumped the third like nothing and got to the fourth, and just said, `No, thanks.'" she said of his stop there last year.

"Gerard sits on him every day, and he really cares about this horse," she said. "This horse is good at 4' fences, but he doesn't like 5' fences."

Sheppard saddled two horses that were impressive winners at Middleburg.