Steeplechasing's spring calendar includes 13 meets with 62 races and over $1.3 million in purses

ELKTON, Md.--The National Steeplechase Association has released the 2021 Conditions Book, accessible on the NSA web site, which spells out eligibility, distance, and purse details of 62 races spread over 13 meets. 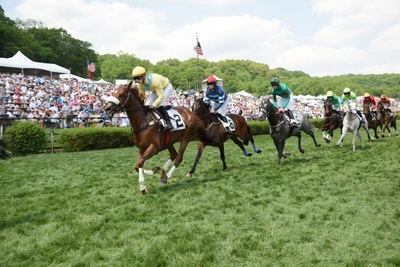 Because of the costly outright ban or limitation of fans, those financial realities have translated into generally lower purses vs. 2019, though compared to the devastating 2020 spring, horsemen have vastly more racing opportunities and prize money -- $1,315,000 in total purses -- to aim for.

Also on the plus side, the schedule calls for the return of 10 meets that were cancelled last year due to Covid-19, plus the addition of a new one: The season-opening Cheshire races in Coatesville, Pa., outside of Unionville, on Sunday March 28.

Three meets have announced they will not take place this spring: Aiken, Foxfield, and Fair Hill.

HIGHLIGHTS of the upcoming season include six hurdle stakes and six timber stakes.

The marquee event, the Iroquois Steeplechase in Nashville, rescheduled from early May, carries $250,000 in purses anchored by the $100,000 G1 Iroquois, which will be contested over 2 ¾ miles instead of the usual 3 miles because of the potential for hot weather on its new date of June 26.

Also on the card are the $50,000 Green Pastures Sport of Kings novice stakes, and the $25,000 Margaret Currey Henley filly and mare stakes.

Close behind in value to the Iroquois are the Middleburg Spring Races at Glenwood Park in Virginia, which as $205,000 in purses, on May 1, featuring the G2 Temple Gwathmey hurdle stakes, and the Virginia Gold Cup Races at Great Meadow in The Plains on May 29, which has $200,000 purse money, including two $50,000 stakes, the G3 David Semmes Memorial and Virginia Gold Cup over timber.

The season marks the return of the Maryland timber triple in April, albeit with purses decreased from 2019 levels.

Headlining the five-race card is the $30,000 Block House handicap for horses rated at 125 or lower.

A number of race meets pushed back their dates, hoping for safer conditions -- and greater distance from the worst of the pandemic -- that would improve the chances of their events taking place and, hopefully, with at least some spectators in attendance.

Most of these meets will be streamed live, and that can be found on the NSA website.