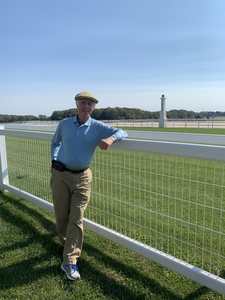 Charlie FenwickRacing mid-pack for most of the race, Franco De Port moved into contention at the last fence, but Energumene drew away to win, eased, by a huge margin of 15 to 20 lengths.

"Franco gave a good account of himself in a very good race," said Charlie Fenwick, who, along with Mike Hankin and Charlie Noell, is one of the three partners in Bruton Street. "But he was beaten by a very, very good horse."

As to whether Franco De Port would go on to race at Cheltenham, Fenwick said he wasn't sure what Mullins is thinking.

"Franco won his first three races, so it's hard to say he doesn't deserve to go to Cheltenham," said Fenwick. "But if he has to run against the horse that won today, maybe not."

"I think it's a great honor to have a horse that's earned the right to go to Cheltenham," said Fenwick. "But I love to win races. I'm only a part of the group, so I'll be happy to do whatever is decided. And Willie Mullins will decide."

"I LOVE to win races,  so I pay attention to the odds. and if the odds say they're against you, I want to go somewhere where I can win," said Fenwick. "I tell my partners that. and they say `The greatest race you ever won,, you went off at odds of 40 to one, so keep your mouth shut.'"

Fenwick was referring to riding Ben Nevis to win the Grand National in 1980.

"We're so fortunate to have problems like this to deal with," said Fenwick.

Hidden Stash, owned by BBN Racing LLC and trained by Victoria Oliver, was rated off the second flight, swung out four wide on the turn and gained ground in the stretch to finish a neck behind Nova Rags, by Union Rags, who was 1 length behind his winning stablemate, Candy Man.