WEXFORD, Ireland--Jockey-turned-trainer Keri Brion is just getting a handle on taking over the string from her old boss Jonathan Sheppard, who recently retired from saddling racehorses, and she has been granted a temporary license to have runners in Ireland until April. 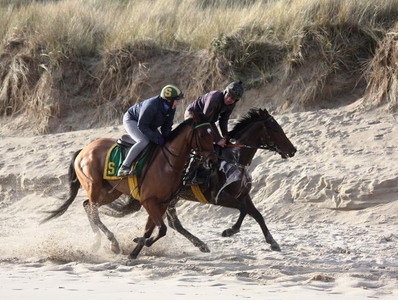 Winston C, left. John O'Neill up, and  Baltimore Bucko, Ker Brion. "It’s actually a dream to train horses of this talent on a daily basis," said Brion.She’s wasted no time in making a major statement of intent with the barn’s star jumper Winston C.

The Dublin Racing Festival at Leopardstown in the Emerald Isle is still a pretty new addition to their program of National Hunt horse races.

Brion is clearly thinking big with Winston C as she and owners Hudson River Farms had entered him in the Irish Champion Hurdle on Feb. 6.

That run is off the cards now, as Winston C was instead placed in the Limestone Lad Hurdle, Naas on Jan. 31.

WINSTON C made his debut in Ireland at Naas at the end of January. 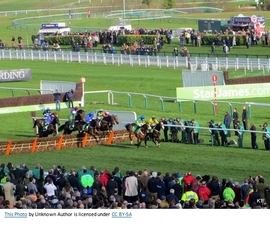 And, to be frank, things didn’t go to plan.

The 7-year-old finished last of five runners, coming home a full 57-lengths behind the winner, Bachasson.

While that did not go to plan for Winston C, he could stay across the Atlantic and run at the Cheltenham Festival where he also has an entry in the Champion Hurdle.

Connections will not hold out too much hope, as Winston C is quoted with odds of 100/1 on the ante-post markets.

Moreover, that run at Naas will not convince many than Winston C can suddenly turn it on in what is arguably the most prestigious hurdle event in racing.

Held at Prestbury Park on March 16, this is one of the most prestigious and historic jumps races in England.

Recent Warwick winner Sky Pirate heads the odds and predictions for the Johnny Henderson Grand Annual Handicap Chase on Ladies Day at the Cheltenham Festival, but few fancy Winston C to make any waves in the Champion Hurdle.

The fact that Brion and the owners have entered him at two big meets across the pond highlights their faith in the horse.

Transatlantic runners are few and far between, but add extra intrigue to what looks an open two-miler hurdle division in the British Isles.

Highly-regarded JP McManus owned duo Epatante, the Champion Hurdle heroine in 2020, and Saint Roi, a classy winner of the County Hurdle later on in last year’s Cheltenham Festival, have both disappointed this season.

Another horse in the same ownership, Buveur D’Air, won the race twice in the past, but is on the comeback trail from a freak injury suffered at Newcastle in December 2019.

While these and other UK and Irish horses have questions to answer, those behind Winston C are dreaming of pulling off one of the greatest upsets in Cheltenham’s recent history.