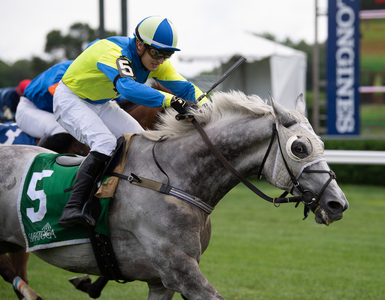 Moscato winning the A.P. Smithwick (Photo by Tod Marks)The award was announced at the 50th Annual Eclipse Awards ceremonies, held for the first time as a virtual event streamed live on Thursday, Jan. 28.

Charlie Fenwick, Mike Hankin and Charlie Noell, owners of Bruton Street, Fisher, Mitchell and even Young had all agreed that they thought Moscato should be the winner, although Hankin volunteered reasons for Snap Decision.

But after the ceremony, Fenwick said that Richard Pittman, a retired jump jockey and a racing commentator who had picked out Moscato as a flat horse for Bruton Street to buy, had said that Snap Decision should have been the winner.

"He said `Any horse that wins seven in a row is the best horses,'" said Fenwick. "And history may say that is right, and at the end of the day Snap Decision may be the better horse, but this is 2020 we're talking about."

While Snap Decision did win seven in a row, three of them in 2020, those races were all novice races and he never faced the type of competition that Moscato faced.

But this year, Snap Decision will be racing in the open division, although he won't meet Moscato until the end of the year, as Moscato has been sidelined until next fall by a tendon injury.

MEANWHILE, Fisher has said plans for Snap Decision include opening with the Temple Gwathmey, followed by the Iroquois and then Saratoga.. so he'll certainly meet horses like Rashann.

"There's an interesting sidelight to the Eclipse Awards," said Fenwick. "Another Eclipse Award winner was Gamine, and she's owned by Michel Lund. He bought my house in Bulter, Md., 10 years ago. Butler has about 100 residents, and with two of us in Bruton Street coming from Butler as well as Lund, three of those 100 are Eclipse Award winning owners."

And just a week after winning the Eclipse Award, Saturday, Feb. 6 will be another big day for Fenwick.

"Brandon Jones Lynch, Annie and Ritchie Jones' daughter, started a syndicate, BBN Stables," said Fenwick. "The first horse we owned was Concrete Roads, who won $1 million, and Brandon sold him for $i.9 million, So now we've got a 3-year-old, Hidden Stash, and he's going in the Derby trial at Tampa Bay next Saturday. So we've got a horse on the Derby Trail. And also next Saturday Franco De Port is running again in Ireland."

Hankin said that the Eclipse Awards live streamed as a zoom event was well done.

"They showed a video of Moscato playing in the field with Scorpiancer." said Hankin. "They allowed us to thank everyone and highlighted Snap Decison's connections to flat racing."

Snap Decision, by Hard Spun, was bred and successfully raced on the flat by the Phipps Stable.

Bruton Street came into being in 2013.

"It ws the year Animal Kingdom ran at Ascot," said Fenwick. "Mike and I decided we'd go to Ascot, so we went with Connor and our spouses. I was in the paddock, and I saw Charlie Noell standing outside the paddock. Somehow, I got him in the paddock. The next day, the three of us were having breakfast at Connaught Hotel. We decided we'd go in together so that Connor could have a nice horse to race. Charlie and I had bought horses together before, but that was the first time Mike was in, too. Brown Advisory has an office on Bruton Street, so we named our stable Bruton Street, I think we added the US later, after we had horses racing both here and i Europe."