Jonathan Sheppard, one of this country's winningest trainers, announced his retirement

HOLLYWOOD, Fla.--Jonathan Sheppard, arguably America's greatest trainer, announced on Jan. 4 that, at age 80, he is retiring as a trainer in America, although he still has a small string of horses in Ireland, one of which, French Light, will run in his name on Jan. 7. 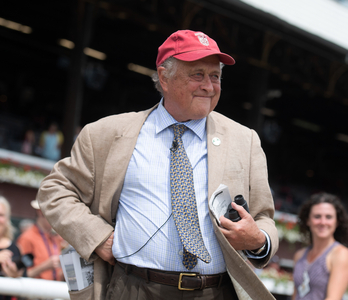 Jonathan Sheppard Among his accomplishments are 15 Eclipse Awards, training a stallion that became this nation's Leading Sire, being the National Steeplechase Association's all-time leading trainer by wins, with 1,242 wins, and by purse earnings, with $24,902,442, winning champion trainer by wins 26 times and leading the sport by purses in 29 years, both records, winning a race at Saratoga for 47 straight years, and, as a breeder, breeding an Eclipse Award winner.

But one major accomplishment not so well known is the number of today's top trainers Sheppard "trained".

Sheppard won 15 Eclipse Awards, and, while two trainers, Bob Baffert and D. Wayne Lucas, have won more, no other trainer won multiple Eclipse Awards both on the flat and in steeplechasing, and Sheppard had winners on the dirt, on turf and over fences.

And, to make it even more amazing, in one year, 2009, he won an Eclipse Award both on the flat with Informed Decision as the Top Turf Female and with Mixed Up for steeplechasing.

Never before and perhaps never again has any trainer won both a flat and a steeplechase Eclipse in the same year.

Only one trainer, Sidney Watters Jr., has won even one Eclipse Award on the flat as well as over fences. 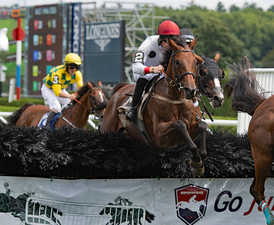 Winston C over the second fence in the G1 New York Turf Writers Stakes, which he won (Photo by Tod Marks)He also trained Storm Cat, who only ran eight times in two years, winning four times with three seconds, including in the G1 Breeders' Cup Juvenile, but he went on to be one of the top stallions in the country, being Leading Sire in 1999 and 2000 and Leading Juvenile Sire a record seven times.

"Storm Cat was never the soundest of horses," said Sheppard, so two races as a 3-year-old, Storm Cat had to be retired, and he went to his owner, W.T. Young's farm in Kentucky.

As Storm Cat had not raced that much, Young wasn't sure what to do with him, and it was Sheppard's wife Cathy who persuaded Young to stand Storm Cat at stud.

Out of Terlingua, by Secretariat, and by Storm Bird, by Northern Dancer, Storm Cat eventually commanded a $500,000 stud fee as a top sire.

He also trained With Anticipation who won five G1 flat races and $2.6.

He is not only a top trainer, but he has significant success as a breeder, too, not only in the past with such as multiple Eclipse Award winner Flatterer, but also this past year, with six of his winners over fences this year being homebreds as well as his homebreds having won a number of races on the flat.

Over the years Sheppard has had many people work for him, and a large number have gone on to utilize many of his training methods to become top trainers themselves.

Two of them, Graham Motion and Janet Elliot, came over from England as did Sheppard himself, and worked for Sheppard a number of years before going out on their own.

Elliot in 2009  became the first female Hall of Fame inductee, and it was Sheppard who presented her with her Hall of Fame plaque.

Others who have gone on to become top trainers include Todd Wyatt, Leslie Young, Kate Dalton, Arch Kingsley and Sanna and Kathy Neilson.

ASKED WHAT stands out in his mind over all his huge accomplishments, Sheppard said it was breeding and training Flatterer.

Flatterer"He not only was a horse at the top of the game, but he stayed there for a considerable number of years," said Sheppard. "I bred him and co-owned him with Bill Pape. His being born right here was something extra special. He was a lovely horse."

Sheppard was born in Ashwell, Hertfordshire, England in 1940, the son of racing official.

He told The Horse in an interview in his Saratoga house a number of years ago that, as he was the son of a racing official, he therefore could not train in England.

He rode in point-to-points in England after graduating from Eton and made what had to be assumed was a half-hearted effort to be a stockbroker at his family's brokerage firm.

Unable to train in England, he left his job in 1961 and came to the States and went to work for Burley Cocks, going out on his own in 1965,

Sheppard for many years trained hundreds of horses, many stabled in different parts of the country, and he knew off the top of his head the breeding, training schedule and race record of every one of them.

He hand wrote the bills for every owner.

Over the years, he had horses stabled at Ashwell, his Pennsylvania farm, and horses in Camden or Florida for the winter months; he had horses at Philadelphia Park and, during its fall season, at the Meadowlands in New Jersey and in the summer at Saratoga, and later at Delaware Park and Presque Isle.

He traveled between those venues on a regular basis and somehow managed to follow every race of every horse.

He hated to have a horse leave his barn without a win and somehow managed to find a spot for almost every horse to win.

He began to cut back on the number of horses he trained a couple of years ago.

He said that he now just has one broodmare left, and just a few of his own horses are still at Ashwell in West Grove, Pa., with all the owner's horses having already been moved.

His house in Saratoga was sold last summer, and one house in Camden has been sold with the second Camden house now on the market.

"I've told all my existing owners that I have decided to retire," said Sheppard. "I really have not felt that great since I had Lyme's disease (which he contracted in 2019). I wasn't at the barn on a daily basis. That's not very responsible when I was supposed to be taking care of valuable horses. I don't have that much energy any more, and there's not more to accomplish. I feel blessed to have been so lucky for such a long period of time."

Sheppard is going out at the top of his game, having won his 26th Leading Trainer title in 2020.

He has said in numerous interviews over the past year how much he appreciates the work of his assistant trainer Keri Brion, who oversaw the day to day works of the horses in 2020 and saddled all Sheppard's starters at steeplechase races, as well as the outstanding work of the whole staff at Ashwell.

Asked what he will do in retirement, Sheppard said he would like to play golf except that he is so bad at it that he wouldn't enjoy it much.

"I will live quietly here in Florida," said Sheppard, who has a home in Hollywood, not far from Gulfstream Park. "I like it here. It's nice, and we have a nice yard overlooking a lake."