LIMERICK, Ireland--Buttonwood Farm's Baltimore Bucko, trained by Jonathan Sheppard and ridden by Gerard Galligan, ran a very good third in a Novice Hurdle for 4 year olds and up at Limerick on Dec. 29. 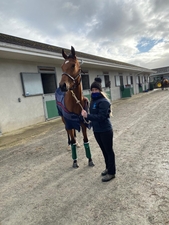 Baltimore Bucko with Keri BryonRunning second or third throughout the 2 mile race. Baltimore Bucko moved into a head in front while in between No Grey Area's and Blanketontheground approaching the last fence and stood off almost back from the wings.

It was a wonder he didn't fall two or three strides after the fence trying to get his feet out of the very heavy going, but he stayed up, just losing enough momentum to finish third, two lengths back of the winner, No Grey Area's.

In very deep going, when a horse stands off like Bucko did, often upon landing he has trouble getting his feet out of the muck and falls two or three strides after the fence, which luckily didn't happen in this case.

The race was shown live on xpressbet.com, and the track announcer was very complimentary about Bucko's race.

"That was a great finish," said the announcer. "That was a great effort, a cracking good finish by the American entry in his first run over hurdles in this country. Hopefully there will be more American horses coming to challenge here, That would be a great thing to see."

"HE REALLY did run a good race," said Keri Brion, Sheppard's assistant trainer who is overseeing the horses in Ireland. "If he had jumped the last fence like that in America, he would have been fine. He has such huge scope. But over here, with the deep going, it just slowed him enough. But he didn't give up, he tried to the end. It was a huge effort." 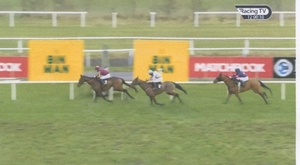 Baltimore Bucko running third at Limerick"The ground was very testing today," said Brion. "Bucko will stay racing over hurdles. He was carrying top weight today, and he was in a ratings race that was probably a little higher rating than what he'll have to run in in the future."

"Gerard was very happy with him," said Brion. "He thinks he'll improve immensely after this race. He still has a lot to learn. The plan is after we get him home in March is to get him ready for Saratoga.""

"After this race, he will get a rating, and then we can make better plans for him over here," said Brion. "All six of our horses have to run once over here to get a rating."

"We're all very thankful to the Moorheads for sending their three horses ( Bucko, Clondaw Camp and Fancy Pance) over here," said Brion. "Mr. Moorhead was thrilled with Bucko after his race."