Motion, Houghton and Sheppard have winners on the flat 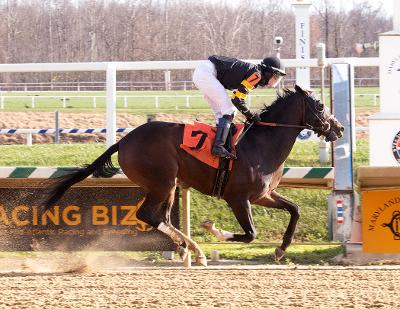 Held off the pace, Jack Gave Back began to move on the turn, worked his way between horses and went to the lead mid-stretch to kick clear and win by 1 1/4 lengths.

Top Valour had been running in stakes throughout the year and dropped to allowance company for the win.

Motion had also won an Allowance race at Woodbine on Nov. 8 with Little Red Feather Racing and Madaket Stables LLC's Succeedandsurpass, who scored by 1 length in a $101,200, 1 11/16 mile.

BERNIE HOUGHTON has had five winners in the past month, beginning with a pair of winners at Penn National on Oct. 23.

The first win that evening came in a $15,400 Claiming race for fillies and mares 3 and up when Morgans Melody, bred by his mother Betsy and owned by her Sylmar Farm, scored an easy victory, opening a clear lead soon after the break and widening it to win by 6 3/4 lengths.

On Nov. 4, it was HnRNothhaft Horse Racing LLC's homebred Lady Lynne who won a $18,100 Maiden Claiming race for 2-year-old fillies.

Lady Lynne ducked out sharply leaving the gate, raced four wide around the turn and moved up in the stretch to win by a head.

Both of Houghton's next two winners were bred by his mother Betsy, but the first was owned by Hillman Racing LLC.

JONATHAN SHEPPARD, fresh off winning four steeplechase races at Charleston on Nov, 15, won an $18,000, 6 furlong Claiming race for fillies and mares 3 and up with Buttonwood Farm's homebred Lady Munnings.

Lady Munnings raced four wide on the turn, took the lead in the stretch and drew off to win by 4 3/4 lengths.