CHARLESTON, S.C.--While Jonathan Sheppard had clinched the Leading Trainer, Races Won title before the Steeplechase at Charleston on Nov. 14, it seemed an impossible goal to also win the Money Won title. 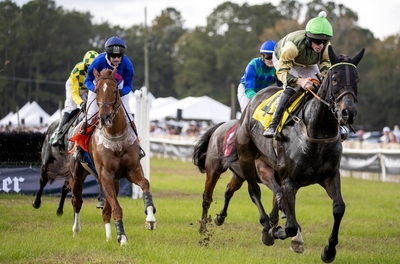 Bet the Pot winning the Maiden hurdle (Photo by The Post and Courier)But Keri Brion saddled not one, not two, not three but four winners on the five race card at Charleston for Sheppard, who remains in Florida due to Covid-19, and Sheppard vaulted into the lead in Trainers, Money Won with $381,340 to Jack Fisher's $377,260.

Sheppard trained 20 winners from 79 starts, while Fisher placed second with 12 wins from 69 starts, while Leslie Young placed third in both categories with $224,350 from six wins.

His first win was in the $7,500 Maiden Claiming Hurdle with High Sierra, who won by 1 3/4 lengths over Lemon Again, trained by Jordon Thompson.

"We ran her back in seven days," said Brion. "We left her in Camden, with Gerard, while I came back to the farm. Running a filly back that soon is questionable, but we had dropped her in class, and she ran a great race."

THE FIELD was very slow to break, with some horses even trotting, as no one wanted to go to the lead.

High Sierra ran third for most of the race, and at one point she was knocked back to last as a horse came over in front of her over a fence, impeding her, but she came back quickly and moved into the lead over the second to last fence.

"After the first race, i was thinking maybe we could get the Rider title for Gerard," said Brion, as that win tied Galligan with Mitchell in the standings.

"Penitence doesn't do all that well over up and down race courses," said Brion. "But Charleston is flat, and we got a big break in the weights, with Penitence carrying 140 pounds to Yankee Doodle Boy's 152."

"Bet the Pot won the third race, the $20,000 Maiden hurdle, by 3 lengths over Thomas Cubitt (Fr), trained by Leslie Young.

"That looked to be a very tough race," said Brion. Thomas Cubitt and Compass Point looked really tough. But Bet the Pot really improved over his last race. He's won four times in five starts this year, with three wins on the flat and this one over fences."

Zoom Zoom Zoe then won the fourth race, the $15,000 Ratings Handicap hurdle, by 2 lengths over Notjudginjustsayin, trained by Fisher, and that win put Sheppard over the top in Race, Money Won.

"We would have been really disappointed in Zoom Zoom Zoe (Ire) didn't win," said Brion. "She's a really good mare."

"Lap of the Gods ran great," said Brion. "Gerard thought he had it won. He didn't see the horse coming on his outside."

"I'm so glad we were able to get the Leading Rider, Races Won title for Gerard," said Brion. "He's a real team player. He does a lot of shipping for us on his off days, shipping horses to the flat tracks to race."

"We're going to have a barn party on Wednesday," she said. "There are a lot of people working behind the scenes that contributed to this. We've had an incredible year. We have a great team, great horses and great owners.

"It's super humbling to be a part of it. I talk to Jonathan every morning. It's amazing to learn from him. The biggest thing is he just lets them be horses. Every morning, all the horses get turned out together. When eventually I train on my own, I am going to follow his philosophy.

"I leave for Ireland Thursday," said Brion. "We're going to give it a go there and maybe pick up some more good young horses for next year. With the five hour time difference, I can still talk to Jonathan every morning."

“Jonathan wants to congratulate Gerard on winning the jockey title," said Sheppard's wife Cathy. "Gerard is a very humble hard-working rider and has been kind to ‘our’ apprentice Parker Hendriks (the son of fellow trainers Sanna Neilson and Ricky Hendriks). Today (Sunday) is his birthday. He is very special to Jonathan for so many reasons. One being that he has the name Parker. Jonathan lost a son named Parker to unspeakable violence. He was extremely close to Parker and they had a special bond.”

Parker was not allowed to ride at Charleston, as that meet had a local rule that all riders had to be 18 to compete.

Parker rode his first winner under rules at the Internstionsl Gold Cup on Oct. 24, and heis going to Ireland with Sheppard's horses.

“We will never be able to thank Keri Brion enough for her incredible intelligence and hard work," said Cathy. "Jonathan says that he developed the program, but now Keri does the hard work to take the burden off of him. Her crew of people is just incredible. Jonathan says his success is due to good horses, good owners, and good help. And he is right. He acknowledges that he is lucky, too. He has always told me that ‘It is better to be lucky than smart.’ But don't let him fool you. He is very smart. Very.”