CHARLESTON, S.C.--Jonathan Sheppard won both the Leading Trainer, Races Won and Money Won titles for 2020 to run his skein of Leading Trainer titles to 25, with at least one title coming in each of the past six decades. 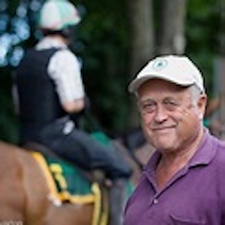 Jonathan Sheppard The Eclipse Award that he won last year with Winston C took his victories there to 14, with two of them coming for flat race horses.

Sheppard is only the second man to win an Eclipse Award with both a flat horse and a steeplechase horse, Sidney Watters Jr. having also accomplished that feat.

While Sheppard has already accumulated an historic number of wins as Leading Trainer and in Eclipse Awards, he may still add to that number, as he says he has no intention of retiring, and his barn  is stacked not only with proven major winners like Winston C and Iranistan, but also a large number of young winners this year who look ready to move up to graded stakes company.

"It was a blessed year," said Sheppard. "It's amazing how sometimes things just seem to fall into place, so you'd better enjoy it while you can."

WHILE STORM CAT only ran eight times in two years, winning four times with three seconds, including in the G1 Breeders' Cup Juvenile, he went on to be one of the top stallions in the country, being Leading Sire in 1999 and 2000 and Leading Juvenile Sire a record seven times.

"Storm Cat was never the soundest of horses," said Sheppard.

"I galloped him in Camden," said his wife Cathy. "I had just met Jonathan then. I galloped him because he bucked everybody else off. I never saw a horse with that much speed."

After two races as a 3-year-old, Storm Cat had to be retired, and he went to his owner, W.T. Young's farm in Kentucky.

"I kept going to see him,  and Mr. Young said he didn't know what to do with him," said Cathy. "I kept telling him to breed him, and he finally did. I just knew he was going to be a great stallion. He didn't do so well the first couple of years, but I told Mr. Young to stick with him. Mr. Young once admitted to everyone, `Cathy made me put him to stud.'"

Out of Terlingua, by Secretariat, and by Storm Bird, by Northern Dance, Storm Cat eventually commanded a $500,000 stud fee as a top sire.

One of the most amazing facts about Sheppard is his huge success on the flat track as well as in jumping races, having won 14 Eclipse Awards with 10 different horses, two of them with flat horses, Forever Together and Informed Decision.

"One of the ones that I was most proud of was Flatterer," said Sheppard. "I bred him and owned half of him with Bill Pape, although he raced in Bill's name."

He is not only a top trainer, but he has significant success as a breeder, too, not only in the past with such as Flatterer, but also this past year, with six of his winners over fences this year being homebreds as well as his homebreds having won a number of races on the flat.

At Charleston on Nov. 15, the last steeplechase meet of the year, two of his four winners as well as the second placed horse n the 3-year-old race are siblings. with Lap of the Gods. Penitence and Bet the Pot all being out of Sheppard's Push My Luck.

Sheppard is breaking new ground this year, sending five horses. including Winston C, to Ireland to race there until March, with Cheltenham, one of England's most important meets, in March being the ultimate goal.

Heaven only knows how many more titles Sheppard can win, as he has a top team of assistants in place and a well stocked stable of race horses.

"Jonathan says his success is due to good horses, good owners, and good help," said Cathy. "And he is right. He acknowledges that he is lucky, too. He has always told me that ‘It is better to be lucky than smart.’ But don't let him fool you. He is very smart. Very.”