COLUMBUS, Ga.--Jonathan Sheppard won two more races, including both the featured $25,000 Ratings Handicap with A Silent Player and the $20,000 4-year-old hurdle with Baltimore Bucko, to go four up in the Trainer, Races Won standings with one meet, at Charleston on Nov. 15, left to compete. 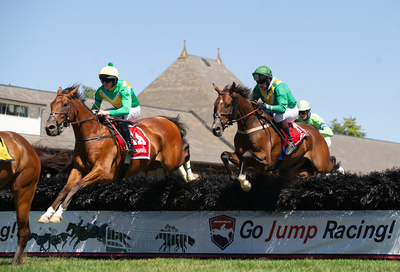 French Light, left, and A Silent Player, right  in a race at Saratoga in which they finished one-two (Photo by Tod Marks)Sheppard has 16 wins to Jack Fisher's 12, while Fisher still leads in Trainer, Money Won, but his margin there has been reduced to $25,920.

His top horse is Moscato, who won one of the only two G1 races this year, the A.P. Smithwick, and  also won the G3 Temple Gwathmey while placing third in the only other G1 race, the New York Turf Writers.

Leslie Young saddled the only other G1 winner, Rashaan, who won the New York Turf Writers and was third in the G3 Temple Gwathmey.

"That just makes me old," joked Sheppard of standing at the top of the game during six decades. "I'm ecstatic. It's not something at the start of the year that you expect to do. When I was younger, I probably was more ambitious. I would try to be Leading Trainer every time. Now I just try to do the best I can. I have good help. I couldn't do it without them."

CALLAWAY GARDENS enjoyed large, competitive fields in five of the seven races, while the remaining two, although fielding only four horses, were still very competitive.

The going was soft, causing one horse, Surprising Soul, to slip and fall on the flat while leading by about 40 lengths and causing other horses that didn't like the soft going to not run their best races.

A Silent Player (Ire), owned by Irv Naylor and ridden by Gerard Galligan, ran near the back of the 10 horse field in the 2 1/4 Ratings Handicap early on, making a late move to win by 1 length over Maccabee, trained by Lilith Boucher, with Bodes Well (Ire), trained by Leslie Young, third.

"A Silent Prayer is always improving," said assistant trainer Keri Brion, who has saddled all Sheppard's horses at this fall's meets. "He's a bit babyish in his brain. He and Gerard get on very well. He runs well for Gerard. He's won twice since he came over along with a second at Saratoga to French Light and a fourth at the Gold Cup."

Baltimore Bucko (GB), owned by Buttonwood Farm LLC and also ridden by Galligan, won the 4-year-old hurdle by 1 1/2 lengths over his stablemate, Another Try, owned by Hudson River Farms, with The Happy Giant, trained by  Allison Fulmer, third.

"Baltimore Bucko would be my favorite of all the ones we imported this year," said Brion, who went to Ireland last December and subsequently persuaded Naylor and the Moorheads, who own Buttonwood Farms, to import a number of horses.

"It didn't look like there would be any pace in the 4-year-old race, so I told Gerard to go to the front and let him settle," said Brion. "He didn't mind the going."

"We had a good day," said Brion. "Codrington College ran well for Parker (Hendriks) in the timber, and we ran one-two in the 4-year-old race. We have a good, competitive group going to Charleston next week, so fingers crossed."

With Galligan riding Sheppard's two winners, he moved up to just one behind in the Jockey, Races Won, with Mikey Mitchell leading with 11 wins to Galligan's 10.

FIVE HORSES from Sheppard's barn in West Grove, Pa., are leaving for Ireland on Nov. 24, with Brion going over about a week before them.

Winston C, who won both the Smithwick and the Turf Writers in 2019, Baltimore Bucko, Fancy Pants, Clondaw Camp and French Light will make the trip to Ireland, where they will be stabled at Baltimore Stables with Brion training them and remaining with them until after Cheltenham in March.

"Winston C will run on Dec. 31 at Puchestown, and Baltimore Bucko and French Light will probably also start around then," said Brion. "There are a lot of opportunities to ran in Ireland. The end goal is Cheltenham."

"Amber Hadyka will supervise the barn here while I'm in Ireland," said Brion. "There's nothing much doing here in December, in January the horses will start jogging on the roads and begin galloping in February, and I'll be back in March."

It looked like the Hendriks family of owner Wendy, trainer Ricky and jockey McLane should have won two races, but G1 hurdle stakes winner Surprising Soul, making his first start under rules over timber, slipped and fell on the flat just a couple of fences from home while holding a commanding lead that stretched to 40 or 50 lengths at times in the first race, the $10,000 Maiden Timber.

"McLane said he had given him a breather and that he was going well when he slipped and fell," said Wendy Hendriks. "Ricky said he got on the van fine this morning. I was so happy to hear that."

"Surprising Soul jumped a hurdle that had a wing slanted over it after he fell," said Ricky the day after the races. "He's on his way home now and seems fine."

Tomgarrow, owned by Leipers Fork Steeplechasers and trained by Young, won the Maiden Timber by 14 1//2 lengths over Motivational, trained by Ted Thompson, with Sky Diving, trained by Sheppard, third.

The Hendriks contingent came right back with a win in the second race, the $7,500 Apprentice Timber.

McLane rode Officer Sydney to win by 4 lengths over Codrington College, with another owned by Wendy and trained by Ricky, Cheers to Us, ridden by Archie Macauley, third.

"Officer Sydney went very well," said Wendy, "I was happy with him."

"We're done for the year," said Ricky. "We'll take the horses home and regroup. Mom and I are going to Kentucky next week for the sale to try to replenish our stock."

Ricky has been saddling a lot of flat winners owned by Wendy, Debra Kachel and himself, and some of them, including the best one, Sandy Lane Kitten, have been schooling over fences in preparation for becoming steeplechasers next season.

A number of horses that failed on the flat have turned out to be good at jump races, including such as Doc Cebu, a two-time Timber Horse of the Year.

The Steeplechase at Charleston on Nov. 15 is the final meet of the year.

"Skylar and Parker won't be allowed to race at Charleston because they aren't 18," said Ricky Hendriks. "It's a home owners rule there. But a lot of trainers aren't going because of that."

"Parker is getting to go to Ireland with Sheppard's barn," said Hendriks of his son. "That will be a terrific experience for him."