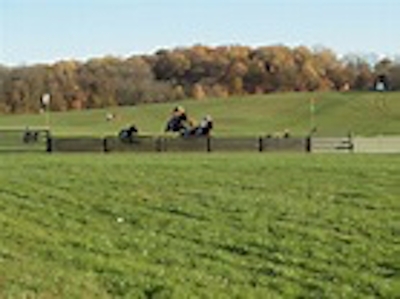 Trained by David Bourke and ridden by Barry Foley, Curve of Stones won the National Sporting Library and Museum Cup Stakes at Middleburg on Oct. 10 and followed that up with a seven length victory in the International Gold Cup Stakes on Oct. 24.

Mystic Strike, trained by Todd McKenna, who won last year's Pennsylvnia Hunt Cup and who was second at Middleburg to Curve of Stones, is back to defend his title.

Super Saturday, trained by Kathy Neilson, second in the 2018 Hunt Cup, third in last year's Hunt Cup and second at this year's Gold Cup, is also entered on Sunday.

Grand Manan, trained by Billy Meister, who was second in last year's Hunt Cup and is always a threat in timber races, is back for another try for a win.

STAND DOWN, trained by Joe Davies, won the 2018 edition of the Hunt Cup but fell in last year's race, is aiming at repeating his 2018 victory.

This will be Curve of Stones first time to run in the Pennsylvania Hunt Cup Stakes, which, with so may top entries, is stacking up to be a very competitive race.

The Pennsylvania Hunt Cup, which is being run without spectators, will be live streamed, and that live stream can be found on the National Steeplechase Association's website.

The $15,000 Arthur A. Choate Jr. Memorial Allowance timber is scheduled at 1:30 and has nine entries.

The Hunt Cup Stakes is scheduled for a 2 p.m. post time.

The final race is the Athenian Idol Apprentice Training flat race has been split into two sections, one with 12 entries and theother with 11 entries.