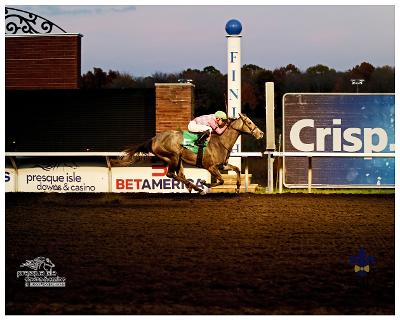 Caravel winning the Malvern Rose Stakes (Photo by Coady Photography)This was her second Stakes win, both at Presque Isle and both under Morales, and her fourth win from five starts, running her earnings to $140,872 and contributing to Morales' Leading Jockey title at Presque Isle.

"She shot out of the gate at the start when she broke, so it was clear we'd take the  lead," said Morales. "I was nursing her all the way, and I had a ton of horse left in the tank when I hit the stretch, and when I asked her she just took off."

"THIS FILLY is such a treat," said Merryman, who shipped Caravel up to Presque Isle the day before the race, a seven hour trip from Fair Hill, Md., where Merryman trains.. 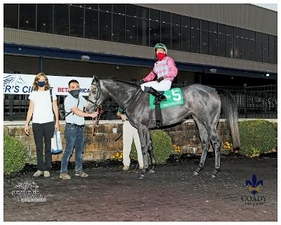 Liz Merryman and Caravel Coady"She cut her head in the trailer when she got to Presque Isle," said Merryman. "She wheeled around in the box stall and hit her head on the bars in the window."

"I was obviously very shaken and worried about her," said Merryman. "I had the state vet look at her. He came back the next morning, and it looked better, it wasn't swollen. He said she was fine to run."

"I put her through my daughter Liza Hendrik's online auction company, Wanamaker.com's sale Oct. 8, and she didn't meet her reserve of $350,000." said Merryman. "I was okay with selling her because I have her dam Zeezee Zoomzoom."

The only race that Caravel has lost was the 1 1/16 mile Hilltop Stakes on the turf, but Merryman said that the turf came up very soft, and she thought that was what had gotten her beaten. She finished third.

"I wouldn't be opposed to running her long on the turf again," said Merryman, adding that she was bred to run long. "Or I might give her the winter off."

WENDY HENDRIK'S Nevisian Spirit, trained by her son Ricky, also won at Presque Isle on Oct. 22, scoring in a 18,000, 1 mile and 70 yards Claiming race, and Merryman had a van full of winners on the trip home, as she also shipped her former mother-in-law's Nevisian Spirit.

Nevisian Spirit runs in the name of Debra Kachel, but is actually owned by Kachel and Wendy and Ricky Hendriks.

The 5-year-old mare, also ridden by Morales, saved ground through the turn and edged up late to win by a neck.

Never far back, Wait for It swung three wide in the turn and drew off to win by 2 1/4 lengths.

Prodigy Doll set the pace and drew off to win by 9 lengths.

Houghton's own Octoraro Orphie won an $18,000, 6 furlong Claiming race at Penn National on Oct. 21, starting slowly and reaching the front inside the final sixteenth and holding on to win by 1/2 length.