ERIE, Pa--Queen Medb (Ire) won her first stakes since being imported into this county in late 2018, gamely holding off a fast closing Irony of Reality by 1/2 length for the victory at Presque Isle on Oct. 19. 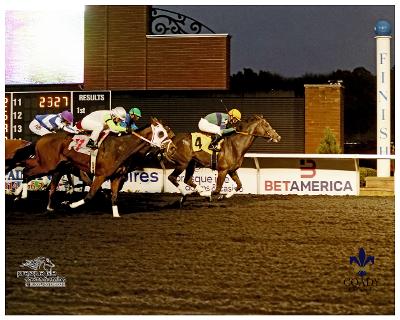 Queen Medb (Photo by Coady Photography)Owned by Madaket Stables, Tim and Anna Camron and Bradley Thoroughbreds, trained by Brendan Walsh and ridden by Willie Martinez, Queen Medb won the $75,000 H.P.B.A. Stakes at Presque Isle and now has three firsts and four seconds from 10 starts in this country.

"She was her own pilot," said Martinez of Queen Medb after her win on the all-weather track at Presque Isle. "I was just there for the ride."

"Down the lane, she showed her class," said Martinez. "She's really game. When she saw that horse coming to her on the outside, she took off again. She saw the horse on the outside before me. I was more concerned with the horse inside me."

"She just took off," said Martinez. "I was a passenger."

Racing mid=pack through the beginning of the 1 mile and 70 years race, Queen Medb got through on the inside turning into the final turn, swung three wide entering the stretch, overtook the leaders and held on for the win. 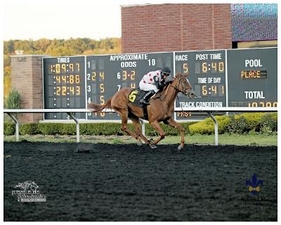 Plantation Field in Unionville, Pa.,where many Eventing competitions were held, including a 4* championship, recently announced the termination of Eventing at Plantation Field due to Eventing Nation's and USEA''s refusal to call it Plantation Field, instead intending to refer to it a "P Field," due to the "slavery" connotations of Plantation.

Calling it P Field made it look like Plantation Field owner Cuyler Walker's family were slave owners, whereas in fact it was an act of great generosity by Plunkett Stewart family's in allowing a Boy Scout troop to plant trees on the property 80 years ago.

Luckily for the Webers, racing doesn't seem to adhere to such over-the-top political correctness.

Repeated questions to the USEF, which has acquiesced to USEA's refusal to use the work plantation, as to whether driving competitions at Live Oak Plantation would also have to change its name or suffer the same fate have not been answered.

Sweet Souper Sweet, a Fl-bred daughter of First Samurai, who won the  $75,000, 6 1/2 furlong Presque Isle Debutante Stakes for 2-year-old fillies by 2 1/4 lengths, won her first race a maiden Special Weight at Woodbine on June 27, then finished sixth in the Bolton Landing Stakes at Saratoga on Aug. 19. 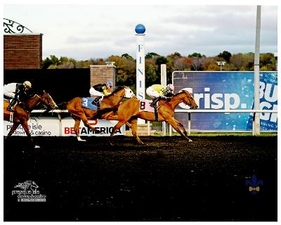 Like a Saltshaker (Photo by Coady Photography)Owned by Magic Oaks, bred by Glenn E. Brok LLC, trained by Adam Rice and ridden by Harry Hernandez, Like a Saltshaker won the Stakes after finishing fourth in his first start in a Maiden Special Weight at Presques Isle and then won a Maiden Special Weight at Presque Isle on Sept. 29.

Franco did a spectacular job of riding, sending Blame Debbie to the front and then setting exceptionally slow fractions so that when Always Shopping came to her in the stretch, Blame Debbie was able to dig in gamely and hold off the challenge to win by a head.

Blame Debbie now has three wins, one second and three thirds, including one in the G2 Demoiselle Stakes at Aqueduct as a 2-year-old, and earnings of $215,920.

Amazing Anna went to the lead soon after the break and widened her lead under mild urging to win by 5 1/2 lengths.