LAUREL, Md.--Michael Matz had three winners in one week, including two allowance winners and a maiden special weight winner, the most recent being Richard L. Goldman's Maryland homebred Good Life Cider in a $38,850 Allowance race for fillies and mares 3 and up at 1 1/16 miles on the turf at Laurel Park on Oct. 10. 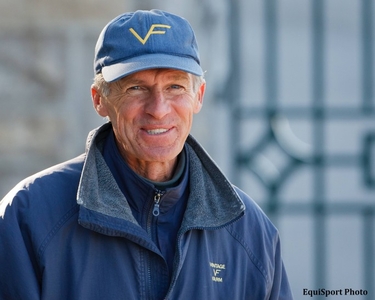 Michael Matz"This was only Good Life Cider's fifth start," Matz said of the 3-year-old filly. "She was just a  little green in hr first starts."

"I took her to Florida last winter and never got a race  in her, so Mr. Goldman said to send her back up north," Matz said. "Then she got a little sick. This was the best race she's run in."

Good Life Cider is by Uncle Mo out of Apple Cider, by More than Ready.

"Mr. Goldman's son is also involved in racing, and he told me that Good Life Cider's half-brother, by Flatterer, was the second highest priced horse at the recent Fasig-Tipton sale at Timonium," said Matz.

Blameless, by Blame out of Dancing to Town, by Speightstown, ran three times in 2019 and then broke his maiden at Gulfstream Park last January.

"He's a real nice horse, so hopefully we can continue with him in the next couple of races," said Matz. "It's hard to get the turf races to stay on the turf in the fall, so we'll try to get one more turf race for some of these horses."

Jonathan Sheppard keeps his mares and foals at Buttonwood Farm and bought a few mares for the Moorheads when they decided they wanted to breed their own race horses, and he advised the Moorheads on the stallions to send the mares to.

Artistic Endeavor in by Munnings out of Encore Saritta, by Consolidator, and this was his second race, having finished sixth in a 5 1/2 furlong race on Sept. 7.

"Rod called me last year and told me that Jonathan had Lyme disease," said Matz. "He said that they would keep their jumpers with Jonathan but wanted to move their flat horses somewhere else. I've had these horses for a while."

"Artistic Endeavor is a nice horse," said Matz. "The first time he ran, his jockey, Jeremy Laprida, told me she needed a little more distance."

"He was all over in the race he won, but hopefully he'll learn a lot out of that," said Matz.

Artistic Endeavor save ground early, split foes and then was left with rail on the final turn, split rivals again near stretch, was bumped by Doctor Doom at the head of the stretch, was brushed and carried out through the stretch by that rival and got the decision by 3/4 length.

"It''s always nice to have a winner, and three in a week is super nice," said Matz, who was a top grand prix jumper rider before switching to training races horses.

And now his children are following in his showing footsteps.

"Alex has been placing in grand prix classes in Tryon on a horse he trained up through the ranks himself." said Matz.

Merryman has had the mare since her first race in 2017, and Flyingontheground now has four wins, three seconds and a third from 15 starts and $106,267 in earnings.

She won the Allowance race at Delaware Park by a head.

BERNIE HOUGHTON'S own Pennsylvania homebred Fairy Dust won a $18,800, 6 furlong Claiming race for fillies and mares 3 and up at Penn National on Oct. 7.

Fairy Dust won by a length and now has two firsts and two seconds from six starts with earnings og $33,188.

RICKY HENDRIKS trained another winner for his mother on Oct. 6.

Hendriks, better known as a steeplechase trainer, has had a large number of winners on the flat since Covid-19 shut down racing last March.

Embrace the Grind, bought by Wendy Hendriks from Cherry Valley Farm, has hit the board in three of five races for the Hendriks since his first race for them on June 20, 2020.