Fisher wins two in Middleburg to move into a tie with Sheppard for Leading Trainer, Races Won

MIDDLEBURG, Va.--Jack Fisher, with two wins to Jonathan Sheppard's one win at the Virginia Fall Races in Middleburg on Oct. 19, moved back into a tie for Leading Trainer, Races Won and extended his virtually uncatchable lead in Trainer, Money Won. 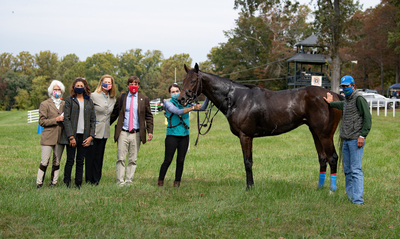 "I don't really care that much about winning the Trainer title," said Fisher. "I've stopped on a lot of my horses. It's more satisfying to have a really good year like we did last year."

With no major stakes races left in the remaining five meets, Fisher has had some younger maidens he had run this fall, but his barn is weighted towards stakes horses so most of his top horses are finished for the year.

Fisher said he would run Doc Cebu at the Gold Cup on Oct. 24 and that New Member might run again, as well as Pepe Le Pugh in a steeplethon.

"I REMEMBER talking to Jonathan at a  race meet about five years ago, and he asked me if I thought I would ever match his record," said Fisher. "I said, `If I ever come that close, I hope someone will shoot me.' I wouldn't want to train that long."

National Steeplechase has changed its slate of races, eliminating claiming races and instituting a ratings system so that horses compete against horses of their equal ability.

"I hate the ratings system," said Fisher. "With claiming races, I could find new homes for my horses that didn't fit."

Fisher said that in steeplechasing, all the barns are good, so you don't lose a horse to a place where he'll be badly handled and that usually they go to a barn where they have a new job like breaking in a younger rider..

"I had six horses claimed from me in the last few years, and I was thrilled to lose each of them and with where they went." said Fisher. "Now, if you have a horse in a lower rating and he can't win, it proves he shouldn't be in training."

"I'd rather run in a claiming race than in a ratings race where someone else determines the worth of your horse," said Fisher.

FISHER started the day by saddling the winner of the first race, a $15,000 Maiden Hurdle,

Lemonade Thursday, ridden by Mikey Mitchell and owned by Riverdee Stables, a syndicate organized by Sean Clancy, won by a neck over Thomas Cubitt (Fr), trained by Leslie Young.

Shepphard had started the day leading in Races Won by one, so the first race Fisher won left them tied and the second put Fisher one ahead.

But then assistant trainer Keri Brion saddled Hudson River Farm's Another Try, ridden by Darren Nagle, to win the $10,000, 3-  and 4-year-old Maiden Hurdle, and that put Sheppard and Fisher back in a tie at 12 races each..

Sheppard bred Another Try, by Redeemed, who has won in allowance company on the flat and has placed in four of his six races over fences.

Another Try won at Middleburg by 4 3/4 lengths over Rambaldi, trained by Young, in a race that had quite a bit of rough bumping in the stretch.

Bickley, trained by Fenneka Bentley and ridden by Mitchell, came flying through the stretch. crowded in on Rambaldi, cutting him off completely, and then catching Another Try and bumping him, knocking him off stride for a moment, and then battling with Another Try to finish a short head in front, only to be disqualified to third by the stewards.

Sheppard just missed winning another race when his own Bet the Pot was beaten by a neck in the second division of the $15,000 Maiden Hurdle, losing to Mr. Bridger, trained by Richard Valentine.

Invocation, owned by Straylight Racing LLC, trained by Mark Beecher and ridden by Sean McDermott, came flying through the stretch to catch Mercoeur, trained by Young, and go on to win by 2 1/2 lengths in the $15,000 Steeplethon.