Jonathan Sheppard moves into the lead in Trainer, Races Won 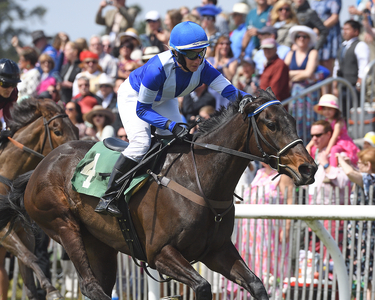 Keri Brion pats Inverness near wire in a race prior to Foxfield (Photo by Tod Marks)Sheppard dominated as steeplechasing's Leading Trainer in the 70s, 80s and 90s, winning the Money Won title 23 times, until Jack Fisher began to dominate the Trainer awards in the 20s.

Sheppard now leads in Trainer, Races Won, with 11 wins to Fisher's 10, but Fisher still leads by a large margin in Trainer, Money Won.

With five meets remaining on the fall schedule, it may be a race to the wire for the Leading Trainer titles, but Fisher's stable is full of top rated horses, while Sheppard's is full of young, up-and-coming horses as well as a few stakes horses, so with all the upcoming meets concentrating on lower rated horses and amateur and apprentice races, and no stakes races left on the schedule, Sheppard's barn may have the slight edge in Races Won.

"WE HAVE A nice, well-balanced stable now, so we're keeping our fingers crossed," said Sheppard. "We have a great team at the barn led by Keri Brion."

The Sheppard entry of Inverness, ridden by Tom Garner, and Buttonwood Farm's Zoom Zoom Zoe,  ridden by Gerard Galligan, ran one-two in the Ratings Handicap at Foxfiled, with Zoom Zoom Zoe flying at the end and just missing the win by a short length.

Sheppard said he was a little surprised at the result, having thought that it would have been Zoom Zoom Zoe winning over Inverness.

"We have high hopes for Zoom Zoom Zoe," said Sheppard.

This was only Zoom Zoom Zoe's third start, she was a filly running against colts and geldings and she was carrying the second highest weight.

Inverness led most of the race while Zoom Zoom Zoe ran  in mid-pack until the last fence,

"It's a hard course to make up ground on," said Sheppard's assistant trainer Brion, who saddled all Sheppard's entries at Foxfield. "Gerard said Zoe was off the bridle at the beginning of the race and didn't get into it until the end."

"The instructions I gave to Tom were to go out in front," said Brion. "I told him the one he had to beat was Zoe. Tom gave her a great ride."

Another of Sheppard's entries, KMSN Stable's homebred High Sierra, may have lost her race when Flammetta clipped her heels. which resulted in Flammetta's falling.

But High Sierra's rump went in the air as her heels were clipped - whether she was kicking back at the horse behind her that had hurt her or just reacting to the pain wasn't clear, but she clearly lost her form just as she was beginning to make her move near the end of the race in which she finished fourth in the second race, the $15,000 Filly & Mare Maiden Hurdle, to Screen Image, owned and trained by Theodore Gregory.

Brion said High Sierra pulled up very quickly after the race but that she didn't have any cuts and that she was fine Monday morning.

"Inverness and High Sierra were both bred by Kevin Galbraith (owner of KMSN Stable), so we've had them both in the barn all their lives," said Sheppard.

Morris also saddled the winner of the first race, William Russell's Animal Kingston, ridden by Watters, who won by 4 1/2 lengths over Sanna Neilson's He'll Do, ridden by her son Parker Hendriks, in the $10,000 Maiden Claiming Hurdle.

Elucidation and Scully crossed the finish line together, but parted company soon thereafter.

"He shied at a lead pony," said Scully, who had to get into a car to get a ride back to the winner's circle, where she was reunited with Elucidation, who had been quickly caught by an outrider.

It doesn't affect the outcome of a race if horse and rider part company after the finish.

The Virginia Fall Races in Middleburg, Va., is next on the schedule, to be contested Saturday, Oct. 10.

"We have eight or nine going next week," said Brion. "We have a couple of good ones, I think. It would be nice for Jonathan to win Leading Trainer again."