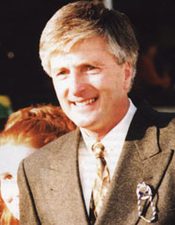 Michael W Dickinson "It was a great win,"said Dickinson. "We knew going into the race that Mrs. Sippy is a very good horse. But Theodora B is mentally and physically improved as she gets older."

"The Strawbridges keep their horses in Pennsylvania in the winter and turn them out  in a 100 acre field with 10 other horses," said Dickinson. "They come back bigger and stronger."

"I called Mr. Strawbridge after the race," said Dickinson. "I said,`You know there is a lot of pressure training for Augustin. After Augustin won the breeder's Eclipse last year, if you don't win with one of Augustin's horses, it has to be the trainer's fault.'"

"I told him that I was kidding, that the real pressure in not training for Augustin," said Dickinson.

HE SAID that he was looking a the E.P. Taylor Stakes at Woodbine as the next race for Theodora B.

"I'll talk to Mr. Strawbridge about the Breeders' Cup, but Theodora B likes a firm going," said Dickinson. "The track at Keeneland will be pretty cut up by then, and it has tight turns. Theodora B is a big striding mare. I don't think that track would suit her."

Theodora B has now won three of her four races this year and a record of six wins, six seconds and three thirds from 18 starts and earnings of $647,911.

BERNIE HOUGHTON had a winner for Sandra Kim Eshelman, Brave Deacon, in a $14,400, 1 mile and 79 yards Claiming race at Penn National on Sept. 11.