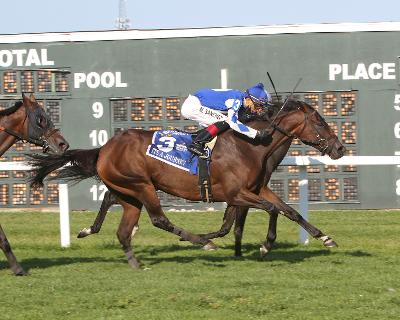 Its A Journey winning the Mrs. Penny Stakes (Photo by EquiPhoto)The holiday program, run strictly for horses bred in Pennsylvania, featured five $80,000 stakes for state-breds with purses for the day totaling $740,000.

The Mrs. Penny Stakes for fillies and mares three and up at one mile and one-sixteenth on the turf produced the most exciting finish of the afternoon.

It’s a Journey, brilliantly ridden by Mychel Sanchez, came from the back of the pack, split horses late and got up to win in the final strides.

This durable mare was bought by EQB at a 2-year-old in training auction,

RESERVED early, It’s a Journey had the inside position going into the first turn but had only one horse beaten in the field of 11. 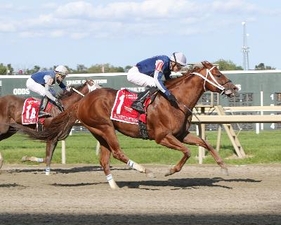 Midtowncharlybrown winning the Banjo Picker Sprint (Photo by Equiphoto)Sanchez found room on the rail during the run up the backstretch, improved a couple of spots, and drew within about five lengths of the leader with a half mile to go.

Moving to the far turn, though, with traffic in front, he again lost those spots, and nearing the quarter pole, was again next to last and still a good five to six lengths behind.

Turning for home, the horses in front of It’s a Journey fanned to the outside and left room on the inside for the 7-year-old daughter of Jump Start to start making a run.

And make a run she did.

She shot through on the inside, and then angled between horses for running room late and got past the favored Puca Penny just before the wire to win it by a head.

The Storm Cat Stakes went to front running Wait for It.

Allowed to control leisurely fractions under jockey Anthony Nunez, the 5-year-old gelded son of Uptopwncharlybrown finally shook loose of longshot Tudox Expectations coming to the quarter pole, opened a clear lead turning for home and then pulled away late to win by a comfortable2 1/4r lengths.

Owned by Uptowncharlybrown Stud and trained by Ed Coletti, Wait for It went off as the public’s choice at 7-5 and paid $4.80 to win. He covered the one mile and one-sixteenth over a fast track in 1:44.26.

Right on the heels of blazing pace setter Dancing Bull through wicked fractions of 21.55 and 44.11, Midtowncharlybrown fell about three lengths behind as the field came into the stretch.

The 6 year-old son of Uptowncharlybrown, however, refused to surrender.

As the pace began to finally take its toll on Dancing Bull, Midtowncharlybrown started to close the gap again as they passed the eighth pole.

He finally surged ahead with about 70 yards to go and then moved away at the end to win by just over a length.

It was the second straight win in the Banjo Picker Sprint for Midtowncharlybrown, trained again by Ed Coletti and ridden to victory by Roberto Rosado.

Pink Caddy rallied to victory in the Dr. Teresa Garofalo Memorial Stakes for fillies and mares three and up.

The 3 year-old El Padrino filly got a race set up that suited her style and she ran big to take full advantage.

Expected to come from off the pace, Pink Caddy got a three way speed duel in front of her and sat fifth with about a half mile to go.

Rounding the far turn, she started top pick off rivals and moved within striking range as they approached the top of the stretch.

Well regarded Sunny Dale had inside position turning for home, cut the corner and took the lead with just one furlong to go.

Four wide off the turn and in the middle of the race track, Pink Caddy just kept coming.

Striking the front with a sixteenth to go, she edged away late to win by a full length.

Owned by Club Risque Stable and Greg Quick and trained by Randy Allen, she went postward as the second choice at 2-1 and paid $6.20 to win.

Jockey Mychel Sanchez picked up his second stakes win of the day and Pink Caddy covered her six furlongs in 1:10.97.

Had it not been for a pair of late scratches, Monster Racing Stables’ The Critical Way would not have been in the gate for the five furlong turf sprint, the Marshall Jenney Handicap.

Drawing in to the field of11, the 6-year-old gelded son of Tizway shot out of the gate on top, sprinted away to a clear early lead and never looked back.

Leading every step of the way under jockey Ruben Silvera, The Critical Way flashed under the line a decisive four and a half length winner.

Trained by Jose Delgado, The Critical Way posted the day’s biggest upset at odds of 11-1 and paid $25.00 to win.