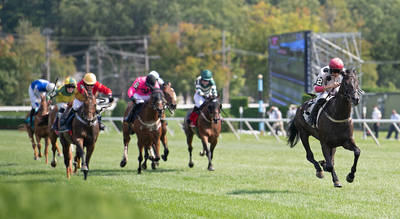 Saddled by assistant trainer Keri Brion, Iranistan sat second behind Bodes Well for the first two circuits of the track, beginning to move on the last turn, going to the front into the stretch and pulling away to win easily by 5 1/4 lengths over New Member, trained by Jack Fisher, with Go Get the Basil, also trained by Sheppard, finishing third.

With this win, Sheppard moves into a tie for Trainer, Races Won, with Fisher, with each having 10 wins.

FISHER has had 47 starters with 10 winners, three seconds and eight thirds, while Sheppard from 38 starts has an equal 10 wins but seven seconds and 10 thirds'

"It was great," said Sheppard of Iranistan's win. "It was especially great for Ed Swyer, as he lives up there and Saratoga is his home track.

"It would mean a lot to be Leading Trainer again," said Sheppard. "I had my hay day a long time ago, and then all those younger guys went by me. So it would be nice, not just for me but for the tea, for everyone. Keri works so hard."

"Iranistan did it quite easily, despite carrying top weight" said Brion. He needed that last race. But he's matured as he's gotten older. He doesn't need to be in front now."

"He settled really nicely into second," said Brion. "He's a different horse at home now. He's more relaxed. There's no more races for him for the rest of this year. The highest rating for the fall races will be 130 and under, and he'll be over that now."