Preakness Stakes to be run without spectators

BALTIMORE, Md.--The Preaknes Stakes will be yet another major event to be held without fans because of Covid-19. 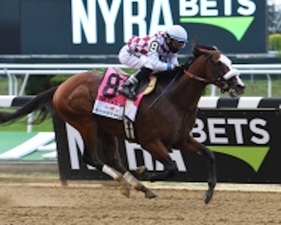 Tiz the Law winning the Belmont Stakes (Photo by Chelsea Lorieul)The Maryland Jockey Club and Stronach Group that owns and manages Pimlico announced that fans wouldn't be allowed in for the Preakness that was rescheduled from its original May 16 date to Oct. 3.

Stronach Group chairman and president Belinda Stronach said the company and Maryland racing had been working with state and local health officials to set a plan for the Preakness. Ultimately, the move was made to limit race day to essential personnel only.

“WHILE WE had hoped to be able to welcome fans as we have for the past 145 years, the health and safety of our guests, horsemen, riders, team members and the community at large is, and will always be, our top priority,” Stronach said in a statement.

The Preakness follows the lead of the Belmont Stakes and Kentucky Derby in not allowing fans to attend.

With the races being run out of order, the Belmont took place June 20 in New York without fans, and while Churchill Downs originally moved the Kentucky Derby to Sept. 5 hoping fans could attend, it adjusted to limited attendance and then finally to none.

After winning the Belmont, Tiz the Law is a heavy favorite in the Derby on Sept. 5, and If he wins, he'd be going for the Triple Crown at the Preakness, which is the third of the three American classic races for the first time.

Fans who already bought tickets to the Preakness can transfer them to the 2021 Preakness or get a full refund.