SARATOGA, N.Y.--Irv Naylor's French Light and A Silent Player, trained by Jonathan Sheppard, finished first and second in the $48,000, 2 3/8 mile Allowance Steeplechase at Saratoga on Aug. 26. 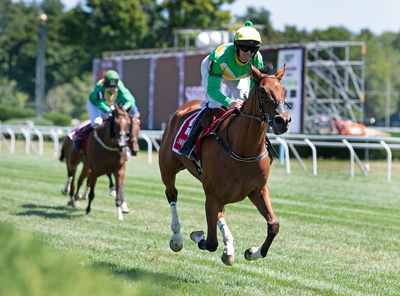 French Light leads stablemate A Silent Player home in Saratoga's steeplechase (Photo by Tod Marks)lors are ecstatic," said assistant trainer Keri Brion, who saddled both horses at Saratoga and who persuaded the Naylors to buy both horses. "They're very happy. I think we're all a bit relieved."

"I can't thank Diane and Irv enough," said Brion of the Naylors, who had never before had a horse with Sheppard. "I just called them last December and told them I had three horses I thought would be good. and they agreed to buy them. These two came together as a package. And they're best friends. they get turned out together at home."

"THIS WAS the Naylors first win at Saratoga in a long time," said Brion. "Diane said she couldn't remember when they last had had a winner here."

"Diane's big thing when I called her about these horses was would they be good enough to win at Saratoga," said Brion. "So I'm glad with all this Covid that we were able to get these two to Saratoga. They'll be able to run up here in future years."

"Knowing what we know now, we could have run French Light in the Turf Writers, but it seemed too much to ask at the time, with his only having won a maiden race," said Brion."Hopefully, he'll run in it next year."

And, having been bought together as a team, the entry ran as a team fifth and sixth in the seven horse race for the first 2 1/2 circuits of the track, with both beginning to make their moves entering the final turn.

Going three wide as the field turned into the stretch, French Light,, ridden by Gerard Galligan, exploded into the lead in just a few strides and won by 5 1/4 lengths,  completely geared down at the finish.

A Silent Player, ridden by Ross Geraghty, moved up to second, saving ground on the inside on the final turn, and just out-finished Gaye Breeze. trained by Meriweather Morris, by 1/2 length.

"You couldn't have scripted it better," said Brion of the pair of friends, having come together and racing together at Saratoga.

"With the purse money cut so much because of Covid, that was probably the most purse money the Naylors will get all year," said Brion. "It's been hard for owners this year. We're lucky with our owners."

Sheppard is now just one win away from tying Jack Fisher as Leading Trainer, Races Won.

"We're one away, and we're loaded, so fingers crossed," said Brion. "There's one more race at Saratoga, and now Shawan Downs is a go. For the rest of the fall season, it looks like we'll find out week to week what meets there will be.

"This was Gerard's first in at Saratoga, too.." said Brion.