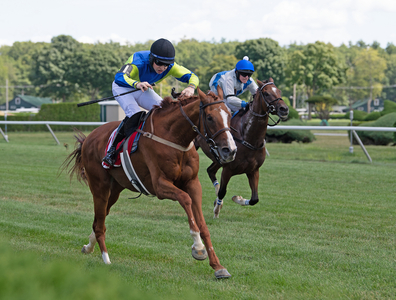 Rashaan leads Redicean to the wire in Turf Writers (Photo by Tod Marks)"What a result, with the two longest shots," said Young, driving back to Pennsylvania with husband Paddy Young by her side, as he was earlier in the winner's circle. "We're very happy."

Moscato's trainer Jack Fisher, in talking about the race the day before, had said that traditionally a longshot won the Turf Writers, and it turned out, to his sorrow, to be right.

"I got Rashaan while we were in Ireland for Brian Crowley's wedding," said Young. "We went with Brian to see this horse. I had an owner for him, but he backed out. I had already had the horse vetted, so I emailed Charlie Noell, and he came through. He bought Rashann for Bruton Street."

"Rashaan has so much talent, but he's a thinker," said Young. "The funny thing is, his name in Arabic means The Thinker. He's a quirky horse. If he puts it all together he's great. Both he and Redicean are genuine horses."

"Rashaan has all of the ability," said Young.. "He's won 13 races in Ireland, and he was bred by the Aga Khan and is related well to serious flat horses. He had been training very well. We had a horse win last week, and they all worked very well, but he was doing it very easily. I thought if he could just do this in a race without overthinking it."

"Redicean had also been training very well and last time, when he ran fourth in the A.P., we got a little bit excited, and I think he likes to go on a little longer," Young said. "We were hopeful going in today, and we're happy it worked out."

"I have a big thank you to Brianne Slater and all our staff," said Young. "If it weren't for them, we couldn't do this. Both horses got stellar rides."

"Paddy legged this horse up," said Young of her husband, a former leading jockey who suffered a severe brain injury in a fall at Radnor a couple of years ago. "Paddy was thrilled. That's why I do this, for my husband."

Rashaan, ridden by Tom Garner, led for the first circuit of the course, dropped back to second behind Pravalaguna for the second circuit, took command after the last fence and won by 2 lengths under a drive.

Redicean, owned by Sharon Sheppard and ridden by Gerard Galligan, raced mid pack, jostled with Optimus Prime on the turn, and dug in in the stretch to finish second, 3 3/4 lengths in front of Moscato, with Gibralfaro fourth, and the mare Pravalaguna faded to finish last.

Rashaan was imported in 2019 as a 7-year-old after winning 13 times in Ireland, didn't finish at Far Hills and was fifth at Great Meadow in 2019, then was third in the Temple Gwathmey in June.

Garner, who won the New York Turf Writers Cup for the second straight year after piloting the Jonathan Sheppard-trained Winston C in 2019, had his choice to ride either Rashaan and Redicean entering Thursday and said he doubted his selection only for a moment.

"The plan was to be handy with him," Garner said. "He's a horse that's not easy at all. He has all the ability in the world, but it's only on his terms. Training him at home, if he doesn't want to train in the morning, he won't go anywhere. He's a real tricky one.

"The team did a great job with him," he said. "I ride him every day. He's a happy horse, and he really enjoyed his work. I came here hopeful rather than confident, I actually thought the better horse was Redicean and I'd made the wrong choice, but he put his best foot forward. He's got so much ability, and when he wants to do it, there's not a lot that will get by him."

His stablemate, Redicean, was fourth in the G1 A.P. Smithwick Memorial on July 23 at Saratoga and finished 3 ¾ lengths clear of 8-5 Moscato for second.

That marked Redicean's best finish in six starts, with his previous win coming at the Spa in last year's Jonathan Kiser Novice.