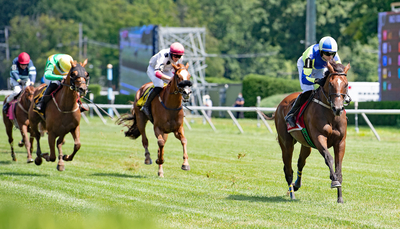 Snap Decision draws off to win the Michael G. Walsh Novice Stakes (Photo by Tod Marks)Despite carrying 165 pounds and giving 12 pounds each to second and third placed Family Tree, trained by Neil Morris, and Galway Kid, trained by Jonathan Sheppard, Snap Decision cruised along in second or third until after the final fence, moved up to join Galway Kid, who had just displaced Family Tree as the leader on the turn ad swept b to win by 5 1/4 lengths under a hand ride.

"I DIDN'T think the weight would bother him," said Fisher, who said Snap Decision would now be turned out in a field as there is no more stakes racing scheduled for steeplechasing.

"We could go to Europe for the racing there, but there's no money in Europe either," said Fisher. "The purse money has dropped there, too."

While the turf was still rated firm for the Novice Stakes, there had been a serious downpour about 20 minutes before the race.

Robert LaPenta's Fast Car, also trained by Fisher, who went off as second favorite to Snap Decision, raced at the back of the field throughout and was eased at the finish.

"The ground was slippery after the rain, and I think he scared himself," said Fisher.

Moscato is favored at 6/5 in the morning line, while Optimus Prime, trained by Ricky Hendriks, is in a 9/5, with Zanjabeel,, also trained by Hendriks, in at 5/1 and the rest of the field at 10/1 or higher.

Both Moscato and Optimus Prime are weighted at 160,, while giving Zanjabeel eight pounds and the rest of the field 18 to 20 pounds.

"I expect Moscato run his race," said Fisher. "But he and Optimus Prime are giving away 18 to 20 pounds. This is a race traditionally won by a lightweighted horse."