Tiz the Law wins the Travers by 5 1/2 lenghts

SARATOGA SPRINGS, N.Y.--Tiz the Law decimated the relatively small G1, $1 million Travers field of six on Aug. 8, finishing with ears pricked under a geared down hand ride to win by 5 1/2 lengths and thrilli his owners Sackatoga Stables and trainer Barclay Tagg. 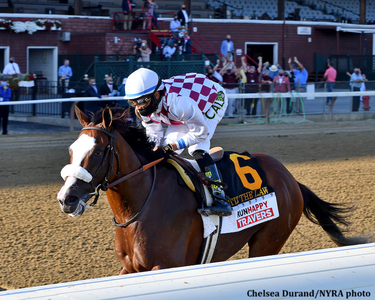 Tiz the Law (Photo by Chelsea Durand, NYRA PhotoDespite coasting through the final furlong, Tiz the Law's final time of 2:00.95 over the 10 furlongs was the second-fastest Travers in 32 years, trailing only Arrogate's track record of 1:59.36 set in 2016.

"I've been doing this a long time and I've always wanted to win the Travers," said Tagg. "This has been in my head my whole life. And now it happened, so it couldn't be better."

"You always have some doubt because many different things can happen," Tagg said. "That's always in the back of you're a mind, but I was very confident in the horse."

It was the first Travers win in his second try for Tagg, who went out on his own in 1972 and, after winning the first two legs with Funny Cide in 2003, completed a career Triple Crown with Tiz the Law's Belmont triumph.

Tale of Ekati, trained by Tagg, finished sixth in the Travers in 2008.

"IT'S JUST SO exciting," said Jack Knowlton, operating manager of Sackatoga Stable. "To be in the race and to be 1-2, there's a lot of pressure. We had well-wishers from everywhere. We saw a performance today that just blows me away. We know we had a nice horse. We thought we had the best horse. To do what he did today, we're looking forward to going to Kentucky now. 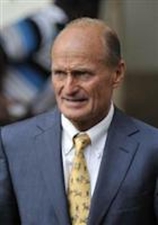 Barclay TaggFunny Cide, the 2003 Kentucky Derby and Preakness winner, ran third in the Belmont Stakes and did not run in the Travers due to a fever detected the day before,. a huge disappointment to Knowlton, who lives in Saratoga and considers it his home town track.

"It's fabulous, we're getting redemption 17 years later," said Knowlton, who was accompanied at the Travers by a dozen of Sackatoga's 35 partners. "Tiz won the Belmont, now he won the Travers. It's quite an accomplishment for our little stable of New York-bred, for Barclay Tagg training our New York bred to win the biggest races in New York. We're just thrilled to death. We're the third New York bred to win this race, the first New York bred in 138 years to win the Belmont Stakes. It says to me that this accomplishment is something that is pretty spectacular. Barclay, [assistant trainer] Robin [Smullen] and the whole team, they made it all happen.

"When we had Funny Cide and won the Derby, it was Funny Cide mania and everything in town was everything Funny Cide. There was a Funny Cide store and everything. It's taken a little time I think for Tiz to get to that point. I really believe after this race that he is going to be adopted, not only by Saratoga but also by New York, and hopefully the country. The mask we have with Tiz on it, we've been getting calls from California and all over the country; they want a Tiz the Law mask. This is the greatest springboard to move on to Kentucky and I think he's proven today that he certainly is a mile and a quarter horse and Barclay has said that all along.

"I wish there were 50,000 plus people here to see this performance live. We're fortunate that we're able to run these races, we're fortunate that NYRA was able to make accommodations for owners to be here." said Knowlton. "It's something I'll never forget. Probably after winning the Derby, which is the highlight of anyone in this sport, this would be number two."

Uncle Chuck, trained by Bob Bafferts, and feared as the spoiler, led from the start, with long shot Shivaree, second to Tiz the Law in the G1 Florida Derby in March, second and Tiz the Law stalking in third in the three path.

Rounding the last turn, Luis Saez had already started scrubbing on Uncle Chuck, while Manny Franco was still sitting still on Tiz the Law, who, when asked, shot away from his opponents, immediately opening up a big lead before being geared down.

"I didn't expect a race like that, but we'll take it. He ran huge," Franco said. "He was there the whole way for me and I was just waiting for the moment because it is a long way to go - a mile and a quarter - and he hasn't gone that distance before, so I'm trying to save as much horse as I could before I made my move.

"He gave me chills. When I pressed the button, he just took off," he said. "He accelerated really hard. After that, I took a peek back and he was going away, and I just saved horse."

Caracaro was second, Max Player got up for third, followed by South Bend, Country Grammer, Uncle Chuck and Shivaree.

"I pictured the horse being at his best laying second or third in the two path just off the leader and I figured the leader would be Baffert's horse, Uncle Chuck," said Tagg. "We discussed that and that's exactly what he did."

"They work well together, they know each other and it's a good combination," Tagg said of Franco and Tiz the Law.

"Juan [ Barajas Saldana, the groom] has been with us for about 20 years,"said Tagg. "He's a fabulous person. The day this colt walked into our barn, he just took over. He hasn't left his side since. He makes sure he bunks right near him every night. Takes care of him all day, every day. He goes everywhere with him when he travels. He's just a great guy and a very, very good horseman. Of course, Robin [Smullen] is my partner and assistant and she's great at everything. She rides him in the morning. He was pretty tough to ride for awhile there, but she got him straightened out. She's probably the most important person in this horse. It's just a great team.

The 1 ¼-mile "Mid-Summer Derby" was contested for the first time without spectatorsbecause pff health protocols amid the ongoing coronavirus pandemic.

Exactly one year to the day following his debut victory at Saratoga, Tiz the Law became just the third New York-bred Travers winner and first since Thunder Rumble in 1992.

Tiz the Law became the first New York-bred in 138 years to win the Belmont Stakes, shortened to 1 1/8 miles, since Forester won in 1882.

The Triple Crown concludes with the G1 Preakness on October 3 at Pimlico Race Course.

His Travers victory kept Tiz the Law perfect in four starts as a 3-year-old, after opening his campaign with victories in the G3 Holy Bull and Florida Derby over the winter at Gulfstream Park prior to the Belmont, which was moved this year to lead off the revised Triple Crown trail.

The Travers also saw its spot on the calendar change from the fourth Saturday in August to the second and, for the first time, become a qualifying race for the Derby.

Bred by Twin Creeks Farm and purchased for $110,000 out of Fasig-Tipton's Saratoga Preferred New York-bred Yearling Sale in August 2018, Tiz the Law burst on the scene with a 4 ¼-length maiden victory at first asking last Aug. 8 at Saratoga, sprinting 6 ½ furlongs against fellow New York-breds.

He stepped up to G1 company second time out and captured the one-mile Champagne at Belmont Park by four lengths, but ran into a sloppy track at Churchill Downs and wound up third - beaten less than a length - in the G2 Kentucky Jockey Club, the only blemish on his record.