Jonathan Sheppard has a first and a second at Colonial Downs

NEW KENT, Va.--Jonathan Sheppard had a winner for a relatively new owner and a second with a homebred in two different maiden steeplechase races at Colonial Downs on Aug. 2. 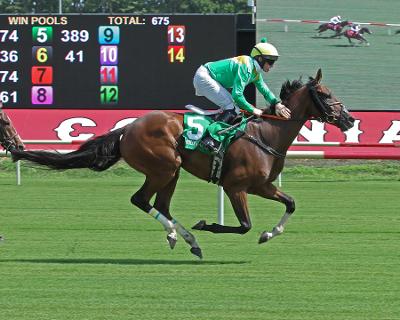 Ridden by Gerard Galligan, A Silent Player ran second or third to last in the nine horse field, began to move on the final turn and drew clear for the win in the 2 mile steeplechase.

Sheppard now has three horses for Naylor, a new owner since last winter.

"Keri (Brion, Sheppard's assistant trainer) was in Ireland last winter on vacation, and she saw some horses she liked," said Sheppard. "They said they were for sale to America because they needed harder ground. She called Irv and asked him if he'd like to buy them. It's nice to have someone that enthusiastic working for you."

"We'll digest this win and see what's next," said Sheppard. "Possibly we'll run him in Saratoga. He's eligible now that he's won, but I haven't sat down and talked to Irv about it."

SHEPPARD'S own 6-year-old homebred Penitence ran second to Go as You Please, trained by Fout, in a $20,000  Maiden race.

This was Penitence first race over fences after a three year career on the flat where her best finish was winning an allowance race with earnings over $100,000.

"I named her Penitence because she's by Redeemed," said Sheppard.

A Happy Giant, owned and trained by Allison Fulmer, won the third $20,000 Maiden race at Colonial Downs, all three being the first, no betting,  races on the card.

A Happy Giant rand second to last early, made a move on the final turn and was up in deep stretch to bear Sherkall, trained by Arch Kingsley.