2-year-old racing to resume in Maryland

The Maryland Administrative, Executive and Legislative Review Committee Aug. 2 said it has approved the Maryland Racing Commission’s emergency regulation on use of race-day Lasix in 2-year-olds, a decision that will facilitate the carding of races for 2-year-olds at Laurel Park. 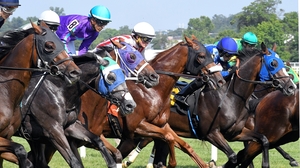 Racing at LaurelNo 2-year-old races have been run in Maryland so far this year.

There are no such races in the current Laurel condition book, which runs through Aug. 22, so the races will be listed as extras on overnights.

The MRC on July 16 approved—subject to adoption of an emergency rule—an agreement between the Maryland Thoroughbred Horsemen’s Association and The Stronach Group/Maryland Jockey Club for a Lasix-free pilot program through 2023.

THE PILOT program was subject to the approval by the AELR Committee of the revised Lasix regulation, which states that no 2-year-old can be administered Lasix within 48 hours of a race; the remainder of the regulation will not be changed.

In a related matter, the MRC Equine Safety, Health and Welfare Advisory Committee July 31 authorized a veterinary survey study of all 2-year-olds that race in Maryland through Dec. 31 of this year.

The objective, as directed by the MRC, is to track the incidence of exercise-induced pulmonary hemorrhage in 2-year-olds racing without Lasix.

Under the survey study, veterinarians will take video endoscopies of all starters in 2-year-old races through Dec. 31, 2020.