Matz has an allowance winner plus Hendriks, Houghton and Motion winners 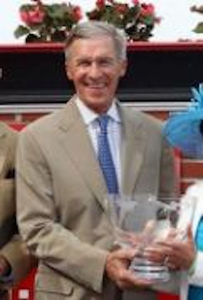 Michael Matz "We were really please with her," said Matz. "The jockey that we had planned to ride her had a fall in the third race and couldn't ride. The only jockey we could get was Alexander Crispin, an apprentice. But he gave her a good ride. She's a pretty nice filly."

This was Lasting Union's second win after finishing fourth three times at Gullfstream Park and then winning a maiden special weight at Laurel on June 19.

"We really liked her in Florida, but we couldn't get a race with two turns," said Matz. "They were all mile races but only around one turn. She wants a bit of distance."

"She's a Canadian-bred, so we're looking at the Woodbine Oaks in three weeks," said Matz. "We don't know if she'll like a synthetic surface, but for a half a million dollars, we have to take a chance."

"Racing without spectators hurts a town like Saratoga," said Matz. "But people are still betting on the races. We were okay during the shut-down, and we didn't lose any owners. But I have cut down. I had two barns at Fair hill, but I've lease one now. I don't need 70 horses any more."

"I have 42 horses now, and that's enough to keep me busy between the race horses and th ekids showing," said Matz. :They're showing in Kentucky now, and DD is with them, With social distancing and wearing masks, with showing and racing being outdoors, it's all okay."

RICKY HENDRIKS saddled a pair of winners for Debra Kachel, horses that run under Kachel's name but are co-owned by Kachel and Ricky's mother Wendy.

"This was Blood Runner's first race for us," said Henriks of the horse bought privately by Kachel from Calumet Farm last year. "He seems like a nice young horse."

A 5-year-old mare, Nevisian Spirit has now won five times with two seconds and one third and earings of $61,550.

"I'm not sure where we'll run her next," said Hendriks. "Maybe we;ll run her back at Delaware."

The heavyweighted morning line favorite, Optimus Prime was making his first race in the abbreviated season of 2020.

"It's always tough when you're the high weight and you don't have a race under your belt," said Hendriks. "He'll run next in the Turf Writers."

BERNIE HOUGHTON  had another pair of winners at Penn National.

Saintly Samurai bobled at the start, stalked the pace, went four wide on the turn and was up in deep stretch for the win.