GRANTVILLE, Pa.--Jonathan Sheppard trained Buttonwood Farm's Lady Munnings to win a $28,000, 5 furlong Allowance race for fillies and mares who have never won a race other than maiden, claiming or starter at Penn National on July 10. 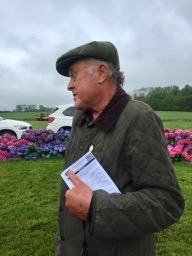 Jonathan Sheppard Sheppard bought Lady Munnings' dam Encore Saritta for $30,000 at auction in 2013 when Mr. and Mrs. Rodman Moorehead III decided they would like to start breeding for racing, and Lady Munnings, by Munnings, was born in 2016.

"We had some issues at the gate with her," said Sheppard. "It took some time to correct. We took her to Delaware Park where the gate crew worked with her."

Lady Munnings didn't start until she was a 3-year-old, and won her fourth start at Presque Isle on May 16, 2019.

"She's quite a useful filly,, as you can see from her record," said Sheppard. "She's a Pa-bred, so we'll look for a race for her now."

In her first start in 2020, Lady Munnings, ridden by Andrew Wolfsont, was never far off the pace on July 10.moved into a short lead in the stretch and  won by 3/4 length.

She now has two wins, two seconds and three thirds from nine starts and earnings of $66.390.

Sheppard has stalls at Saratoga, and will ship horses in and out of those stalls as he as horses entered.

The first steeplechase race in scheduled for July 22, with the G1 A.P. Smithwick on July 23 and the G1 New York Turf Writers on Aug. 20.

Sheppard won both races with Winston C last year and has him aimed for those races this year.

In hr second career start after finishing third firsttie out, Alda was never far off the pace, moved to the lead in the stretch and won by 2 1/2 lengths.

Motion also saddled Hillwood Stable LLC and Richard L. Golden's Artistic Reason, a third , this a colt, by Munnings, to win a $42,042, 1 mile Waiver Maiden Claiming race  for 3 year olds and up at Laurel on July 11.

In his third start after finishing off the board in his first two, Artistic Reason swung five wide on the turn and dug in tenaciously to win by a neck.

Bernie Houghton continued his very successful run with his mother Betsy's Sylmar Farms horses since racing resumed after a three month shuttering due to Covid-19 with another win, this one by Secret Music in a $31,600, 6 furlong Maiden Special Weight  for fillies and mares 3 years old and up at Penn National on July 8.

Secret Music took command at once and opened up thorough the stretch to win by  5 1/4 lengths.