LAUREL, Md.--The Stronach Group, despite the fact that the Maryland Racing Commission allows lasix to be administered on race day, has imposed a ban on lasix at its racetrack for those horses born after 2018. 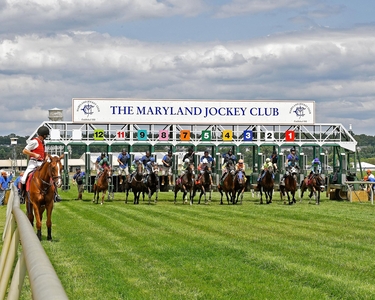 This has resulted in an on-going discussion between Maryland trainers and the Stronach Group, which owns Laurel and Pimlico racetracks.

The discussion boils down to a fight about whether the Maryland Racing Commissiion or the owners of the racetracks can decide whether to allow lasix.

The Maryland trainers are battling a growing ground swell of support throughout the country for banning lasix in 2-year-old races as the first step towards banning lasix in all races, and they are also battling The Stronach Group that, if pushed too far, could simply decide to sell Laurel to developers and only run a 20 day meet at Pimlico. including the Preakness, and that would leave the Maryland breeding and racing industry high and dry.

Lasix prevents bleeding in the lungs of horses, but the consensus is that it is way over used.

LASIX IS a diuretic that causes a horse to lose between 10 and 20 pounds of fluid within hours compared to those horses who are raced without Lasix, which affects their speed.

Maryland trainers have been sending their 2 year olds out of state to race, resulting in 2 year-old races at such tracks as Delaware Park being overwhelmed by Md-breds.

The whole dispute began because The Stronach Group didn't go through the process of getting the Maryland Racing Commission to change its rules before scheduling 2-year-old races banning lasix.

Lasix in 2-year-old racing has already been banned in New York, California, Kentucky and Florida, and in banning lasix, Maryland would join the Breeders’ Cup and every other major racing territory around the world — including England, Ireland, France, Hong Kong, Australia and Japan — which run Lasix-free.

In March 2019, TSG announced that it would impose a ban on lasix in horses born after 2018 at its racetracks.

"We knew in April, 2019, that The Stronach Group's intentions were to ban lasix in 2-year-old races," said Timothy L. Keefe, President of the Maryland Thoroughbred Horsemen's Association. "They went through the process of getting the rules changed in California. They didn't have to get rules changed in Florida. But instead of going through the process in Maryland, the Stronach Group just changed the rules. It's become a regulatory issue."

"We're trying to work with The Stronach Group to come up with a resolution to hopefully get this resolved and get trainers, owners and breeders back to racing 2 year olds in Maryland to take advantage of the good Breeders Awards" said Keefe.

As it stands now, trainers have been conditioning 2-year-olds for months waiting for a race.

Owners and breeders are taking a major financial hit, particularly with Maryland-bred 2-year-olds that must race in state to qualify for the lucrative owner and breeder bonuses that are depended upon to sustain their operations.

On July 1, a $40,000 maiden special weight event at Delaware Park was split into two divisions, each with seven horses—almost all Maryland-based.

"We are appalled and disheartened by the defiant manner and tone in which TSG has chosen to act," said a press release from the Maryland Thoroughbred Horsemen's Association. "We have no problem discussing and reviewing Lasix policy in racing. It has been a decade since the industry conducted an intensive scientific and political review of its Lasix program, and the current regulatory scheme, the most uniform in racing, should be reviewed."

THE STRONACH Group feels strongly that the use of lasix should be revisited.

"For the past several decades, there has been no place in professional sports for the use of performance-enhancing drugs by participating athletes," said Belinda Stronach. "If performance enhancing drugs are neither acceptable nor necessary, why then is the anti-bleeding medication Lasix still being used in Maryland’s thoroughbred racing industry?

"Use of Lasix (technically known as Furosemide) was originally allowed by the Maryland Racing Commission in the 1970s, but only following a veterinarian’s examination and confirmation that the horse had such a severe medical condition called exercise induced pulmonary hemorrhage, commonly known as “severe bleeding.”

"This condition requires the administration of Lasix as a therapeutic medication," said Stronach. "It is a medical fact that less than 5 percent of all North American thoroughbreds require Lasix.

"Yet the use of Lasix, which began decades ago as a therapeutic medication for that small percentage of horses, has become so pervasive, overused and abused that it is now commonly administered to virtually every thoroughbred horse as a performance-enhancing drug. This is because Lasix is a diuretic that causes the horse to lose between 10 and 20 pounds of fluid within hours compared to those horses who are raced without Lasix. As everyone in the horse industry knows, the weight a horse carries directly affects its speed. It is as simple as that — Lasix is being used as a performance-enhancing drug — and it must stop. Healthy horses do not need Lasix to race.

Stronach continued her defense of banning lasix in 2-year-old races.

As part of the national movement to phase out Lasix that was initiated in April 2019 by the thoroughbred horse industries in California, Florida, Kentucky and New York, we are calling on the Maryland racing industry and the Maryland Racing Commission to take the important and necessary step to prioritize equine health and safety and ban the use of Lasix as a race day medication. In so doing, Maryland would join those other tier 1 racing states, the Breeders’ Cup and every other major racing territory around the world — including England, Ireland, France, Hong Kong, Australia and Japan — which run Lasix-free.

The Maryland Jockey Club is fully committed to the long-term success and sustainability of the racing industry in Maryland, and this success must be achieved without compromising the safety and welfare of our beloved equine athletes.

The investment into equine health and safety is not only the right thing to do, it is crucial to the future of thoroughbred horse racing in the state. The recently passed Racing and Community Development Act 2020, which paves the way for an exciting and viable future for the Maryland racing industry, recognizes that industry stakeholders including the owners, trainers, breeders, jockeys and racetrack operators must work together to establish a new standard of equine health, safety and welfare.

The elimination of Lasix is an important factor in elevating the standard of care for our equine athletes. The safety and welfare protocols implemented in California offer a helpful case study. At Santa Anita Park, with the support of the California Horse Racing Board, there are tangible indicators that the investment in equine health is paying off. Certainly, there is more work to be done, but Santa Anita Park has experienced:

A 71% decrease in total racing fatalities;

A 16% decrease in total training fatalities per 1,000 starts (including non-musculoskeletal fatalities);

A 49% decrease in the total number of training fatalities associated with musculoskeletal injuries per 1,000 starts;

A 50% total decrease in fatalities related to musculoskeletal injuries in training,

As the well-respected Maryland trainer H. Graham Motion recently said in a letter from the prestigious Water Hay Oats Alliance to the Maryland Racing Commission: “The time has come when Lasix should be phased out and starting with two-year-old races makes sense.”

The time is now to move Maryland racing into the future. We call upon all industry stakeholders to come together in a unified manner to phase out the use of Lasix on race day, beginning immediately with two-year-old horses.

Belinda Stronach (This email address is being protected from spambots. You need JavaScript enabled to view it.) is chairman and president of The Stronach Group and 1/ST, which owns Laurel Park and Pimlico Race Course."