Jack Fisher wins four at the Gold Cup, including both features

THE PLAINS, Va.--Jack Fisher vaulted to the lead in both Trainers, Races Won and Trainer, Money Won after saddling four winners, including Snap Decison and Doc Cebu, at the Virginia Gold Cup on June 27. 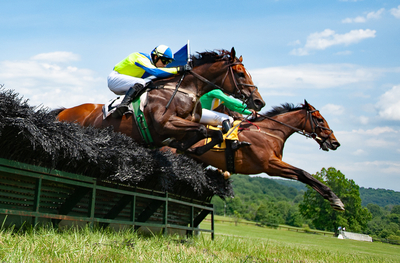 Although it was an easy win, Doc Cebu certainly benefited by Andi'amu (Fr) following Storm King off course midway through the race.

So the question is, has Doc Cebu returned to his championship form of two years ago or did he simply benefit from Andi'amu's disqualification.

With the fall schedule of steeplechase racing still up in the air, that question will have to wait to be answered.

With that win, Snap Decison lost his novice status and will have to run in the open races at Saratoga.

By Hard Spun, Snap Decison was bred by the Phipps Stable and ran from 2016 through 2018 for the Phipps, where he was stakes placed as a 3-year-old.

This was his third stakes win over fences.

Fisher lost Scorpiancer to a hind leg suspensory injury earlier this year, but he still as three top horses, Snap Decision, Moscato and Gibralfaro (Ire) , aimed for the two G1 stakes at Saratoga, the A.P. Smithwick and the New York Turf Writers.

Snap Decision and Moscato are both owned by Bruton Street-US while Gibralfaro is owned by Riverdee Stable. a syndicate headed by Sean Clancy.

Fisher has a good group of horses aimed at other Saratoga races, and he will ship in and out.

LaPenta has campaigned top horses on the flat, including winners in Triple Crown and Breeders' Cup, but this is his first steeplechase horse.

"I've bought other horses from him," said Fisher. "But, with Fast Car, they didn't want to sell him to me and then have him turn out to be good. Hopefully, this will make him look favorably on steeplechasing in the future."

Fisher's fourth win at the Gold Cup was with DASH Stable's Shark du Berlais (Fr) in a $10,000 Waiver Maiden Claiming.

Leslie Young opened the day with a pair of wins, taking a $20,000 Maiden Hurdle with Mrs. S.K. Johnston Jr.'s Emerald Rocket (Ire), who won by 1/2 length over French Light, trained by Jonathan Sheppard, who now stands second in both Trainer, Races Won and Money Won categories after a spectacular start at Middleburg.

Mercoeur won by 6 1/4 lengths over Invocation, who had beaten him last time out, at Middleburg.

Eve Ledyards' Go Get the Basil, trained by Sheppard, won the $20,000 Ratings Handicap by 1 length, after having finished second seven times in past outings.