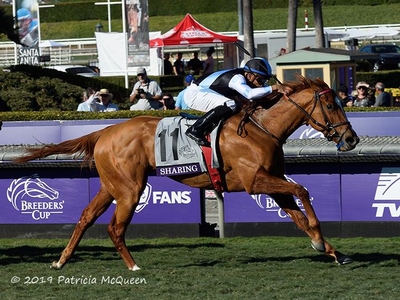 If things work out, Sharing may run at Ascot next a month from now.

"We have a couple of possibilities in mind for her," said Motion. "There's a race at Belmont on Belmont Day that's similar to the one she just won. It's a G3 race for $150,000.'

"Or, it's possible we may take her to Ascot," said Motion."There's a race there for her on June 20, exactly one month after her Churchill Downs race."

Motion said that taking her to Ascot would be partly for the challenge.

"It would be nice to win a G3 stakes at Belmont, but it would be even nicer to win a G1 at Ascot," he said. "It would be a great thing for her. She's a relatively uncomplicated filly, so shipping her there wouldn't be a problem.

"We'll see. Everything has to fall into place, with all that's going on now. But it's only a month away, so we'll see."

Sharing has now won four races along with placing third in her first race from five starts and  earned $787,340.

Malakeh was bothered at the start but went to the lead in the stretch to win the a neck while holding off a cavalry charge of six horses that finished just heads apart.

"She's a stakes caliber filly," said Motion. "I though she won really nicely. We'll be looking for a stakes for her now."

Malakeh now has four firsts, three seconds and two thirds from 10 starts and earnings of $209,255.

Motion said he hadn't heard anything definite about racing in Pennsylvania but that he'd heard it might start again around the middle of June.

He said that Laurel was taking entires on Tuesday, May 26 for races on Saturday, May 30, but that they wouldn't know whether those races could he held until Maryland Gov. Hogan spoke on Wednesday.

"We had to get ahead of it by taking entries today,: said Motion. "Everyone seems to be pretty bullish about having racing at Saratoga, although without spectators. NYRA feels the handle at Saratoga is better that at Belmont.