Jonathan Sheppard wins two in Middleburg, while Leslie Young wins one in Middleburg and one in Genesee Valley

MIDDLEBURG,Va.--While Jonathan Sheppard was in Florida, assistant trainer Keri Brion  saddled two winners for the Hall of Fame trainer at the Virginia Fall aces in Middleburg on Oct. 12. 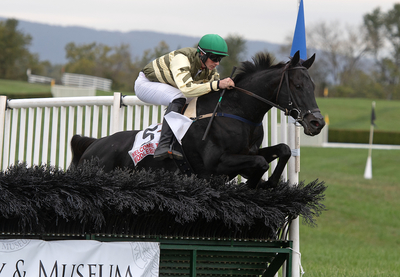 Ebullience (Photo by Tod Marks Photography)Ebullience, a Pa-bred bred and owned by Sheppard, is a 7-year-old by Fairbanks out of Effervescent, who is a younger half-brother of graded stakes winner Italian Wedding, won the $20,000 Handicap by 5 1/4 lengths.

Ebullience, ridden by Darren Nagle, led the entire race to best a nine horse field for his second win over fences after splitting his time between running on the flat and over fences.

"I thought that we'd hunt him over the winter and then start him over timber next year," said Sheppard. "He's not terribly fast but he stays well and he's a good jumper. But when I mentioned that to Darren, he thought we should run him ovr hurdles again next year."

"Darren rode everything for us at Middleburg," said Brion. "He knows these horses, so you don't need to tell him anything. Those were his first two wins after coming back from a broken leg he got last spring."

That was his second start in a steeplethon, in which horse jump various types of fences from hedges to timber to water, after finishing second in one at Great Meadow last year.

"Able Archer is a useful type," said Sheppard of the 7-year-old Pa-bred.. "His owners watched it  on the live feed on the computer and were very pleased. They've been very loyal to him. It's taken him a while to find himself."

Able Archer settled last, moved quickly up at the second to last to lead by a length over the last and go on to win by 2 3/4 lengths.

Ballybristol Farm LLC's Adi'amu. trained by Leslie Young and ridden by Jack Doyle, led every step of the way  in the $40,000 Timber Stakes to win very easily over Super Saturday, trained by Kathy Neilson and Witor, trained by Todd Wyatt.

Andi'amu has run three times in Middlebug and won twice and is aimed for the Gold Cup in two weeks.

Big Bend, a former stakes winner on the flat, was making his first start over fences.

YOUNG HAD a second winner on the same day at the Genesee Valley Hunt Races in Genesee, N.Y. 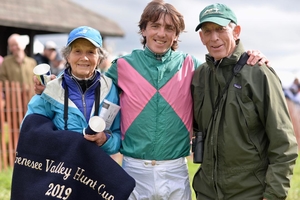 Joy Slater bought Flaming Sword basically as a favor to Young, and he has now won twice for her from three starts. 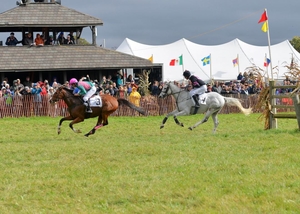 Schoodic winning over Le Chevalier at Genesee Valley (Photos from John Cleland)Schoodic is now also aimed for the Gold Cup, which should be a very competitive and exciting race.

In Genesee's fourth race, Full time Party, trained by Ricky Hendriks for Meadow Run Farm, won by a length over Av A Word.