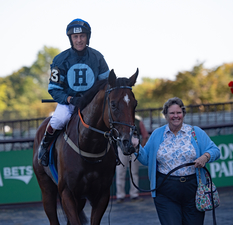 Wendy Hendriks leads Surprising Soul down victory lane after the Lonesome Glory (Photo by Tod Marks)Trained by Richard Hendriks for his mother Wendy Hendriks, and ridden by Ross Geraghty, the 7-year-old Perfect Soul gelding is now a multiple graded stakes winner with six wins, four seconds and a third from 16 starts for Hendriks.

"I'm on cloud nine," said Wendy Hendriks. "It's unbelievable that he won that. There were nine horses in there, and they were all good horses. It seems surreal."

Among the horses Surprising Soul beat were Winston C, who won both G1 stakes at Saratoga earlier this year, Scorpiancer, who won the G1 Iroquois and Moscato, who won the G3 Temple Gwathmey, both last spring.

"I got him as a 3-year-old," said Hendriks. "I bought him at a sale in Kentucky. Someone else had him out looking at him, and I saw him and liked him. I looked up his results, and he'd been running short for Kelly Ackerman, so I looked up his pedigree and thought he wanted long and grass. So I said to Ricky, `Let's buy him and make him a jumper.'"

"HE WAS still a colt, so we gelded him, and Ricky taught him how to jump," she said."I'm so excited He migt go to Far Hills. He wants to run a long distance. But it's up to the trainer where he goes next." 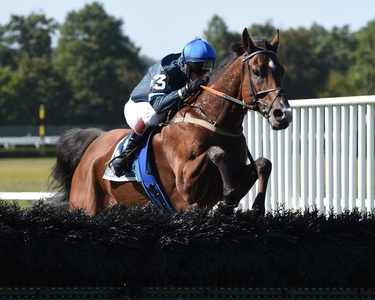 Surprising Soul (Photo by Adam Coglianese, NYRA)Surprising Soul established an early lead in the 10-jump race with All the Way Jose and Scorpiancer tracking.

The front-running trio maintained a steady tempo throughout with 4-5 mutuel favorite Winston C and 3-1 second choice Moscato content to race from the back of the nine-horse field.

Surprising Soul and All the Way Jose cleared the final fence in good order and had plenty in the tank, surging clear of their rivals into the final turn.

Surprising Soul opened up down the stretch to win by 3 3/4-lengths in 4:34.31, while Hinterland came late to beat a game All the Way Jose.

Geraghty said he was hoping for a prominent trip with Surprising Soul.

"It was in the plan," said Geraghty. "I usually get the lead on him. He's a very, very willing horse. He gives you everything that's there. He tries so hard. Once I had him at his speed and he was cruising on, he was happy.

"He puts so much out in every race, and we didn't realize it at the start," said Geraghty. "He won his first three starts one spring in 2017, and we ran him that summer at Saratoga and got nothing, he was a totally different horse. He puts so much into every race and leaves nothing for the next day. He might have one more start this year. You have to be careful with him and just mind him. He gives everything." 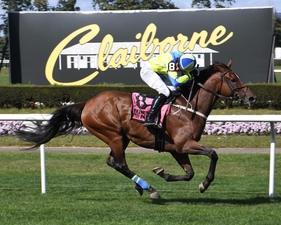 Hendriks said he was pleased with Geraghty's ride.

"We wanted to sit behind All the Way Jose. He likes to sit behind a horse from a half-mile to a mile and go on, but Ross is perfect on the lead," said Hendriks. "I couldn't believe my eyes. Such a great win."

Rounding out the order of finish were Winston C, Scorpiancer, Redicean, Belisarius and Moscato while Bedrock was eased to the finish.

Winston C not only carried the high weight of 160 pounds, giving 16, 18 and 18 pounds to the three that beat him, but also was tight inside Scorpiance on the final turn and struck a cone, pausing briefly,, and couldn't get through on the inside in time to make his run.

BRUTON STREET-US' Snap Decision the 1-2 favorite, won the 8th running of the $75,000 William Entenmann Memorial steeplechase at Belmont Park the day before, Sept. 18. 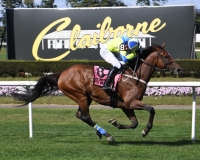 Snap Decision wins the William Entenmann (Photo by NYRA)Trained by Jack Fisher, who saddled three horses in the 2 ¼-mile race, Snap Decision was placed toward the rear of the field in the early stages as Arch My Boy led the field of seven through the first five jumps.

Approaching the sixth fence, Sportswear and Arch My Boy raced up front in tandem with the former taking command through the final three jumps.

Following the last fence, Snap Decision was angled to the outside of Sportswear and took command at the top of the stretch under little urging from jockey William McCarthy.

Arch My Boy made a late bid, but Snap Decision kept him at bay to win by 2 lengths, whle Arch My Boy finished 5 lengths ahead of third placed Chief Justice.

"I had a good trip," said McCarthy, who piloted Snap Decision to all four of his prior starts over jfences. "My horse showed diversity today. There really was no steady pace, and he was pretty keen with me. He's still learning to relax. His jumping was spot on. Once I jumped the last fence, I was tired of holding him, and I had to let him out a little bit. As soon as I let out half an inch of rein, he just took off underneath me. He's a great horse. His flat pedigree is phenomenal, and we're fortunate to have a horse like him run over jumps. He was a high class horse in flat racing but just not reaching the top level. But, he's an awful high class horse in jumps and it looks like he'll be around awhile."

Bred in Kentucky by Phipps Stable, Snap Decision won his previous start over the jumps at Saratoga by an eye-opening 38 1/2 lengths. 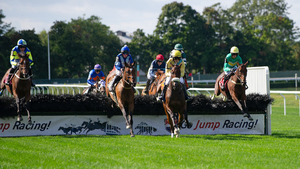 Snap Decision, no. 8, Sportswear, no. 2, Arch My Boy in yellow and Chief Justice, right, take the jump at top of stretch early in the Entenmann (Photo by Tod Marks)Wednesday's race was a fifth start over hurdles for Snap Decision, who previously raced on the flat for Hall of Famer Shug McGaughey.

Snap Decision benefited from the scratch of Teodoro, who entered off of double-digit winning margins over jumps at Fair Hill and Saratoga Race Course.

"Teodoro has a bit of a tendon," said his trainer Ricky Hendriks.

"The scratch helped," said Fisher." It took the speed out of the race. Our horse had the best flat form of anyone in here, so just get him to the last jump and then let him run."

Completing the order of finish were City Dreamer, Sportswear, Cracker Factory and Veneer of Charm.