WILMINGTON, Del.--A stirring battle between two division rivals, a victory by a shipper from Northeast Ohio and a big day for jockey Jose Ortiz capped the return of the MATCH Series to Delaware Park as part of its Delaware Handicap Day program on July 13.

Delaware Park, a longtime host of MATCH competition, was the third of five stops for the 2019 MATCH Series, which will move to Parx Racing Sept. 2 and conclude at Monmouth Park Sept. 28.

The Dashing Beauty Stakes for 3-Year-Olds and Up, Fillies and Mares Sprint–Dirt Division began the four race series.

Ms Locust Point, with Jorge Vargas Jr. riding, took command from the start and led through fast fractions with Bronx Beauty, the slight favorite, not far behind.

The leader drifted out a bit in the stretch and Bronx Beauty switched to the inside, slowly gained on Ms Locust Point and beat her to the finish to win by a neck in 1:09.59 for six furlongs on a track rated fast. Le Weekend finished third.

ORTIZ, WHO was in town primarily to ride Elate in the $750,000, G2 Delaware Handicap, which she won for the second consecutive year, was on Bronx Beauty for the first time.

“It was a great match race, especially because of the way they went at it last time,” Ortiz said.

“That was a tough battle, but we knew that coming in,” said Richard Woll, who owns Bronx Beauty with his wife, Marion. “We knew she was capable of winning. These races get tougher and tougher, but that makes for good horse races. We’re proud of the horse, proud of our trainer, Anthony Margotta Jr., and who could have done better than Ortiz?

“We’re looking forward to the next MATCH stakes, and we’d be glad to see Ms Locust Point there.”

John Servis, who trains Ms Locust Point said the owners are fans of the MATCH Series and plan to race the mare at Parx, where she is stabled and has multiple victories.

Ms Locust Point and Last TruebLove, who was fifth after a bad stumble at the start, both qualified for bonus money in the Dashing Beauty.

With her second-place finish, Ms Locust Point retains the division lead with 24 points, followed by Bronx Beauty with 20.

CAPLA TEMPTRESS, owned by Juddmonte Farms, saved ground early in the $100,000 Just a Kiss Stakes (Filly and Mare Long—Turf Division) at 1 1/16 miles but circled most of the field entering the stretch and edged away to win by one length to give Ortiz his second win of the day. Lift Up allied from last to take second, with Quick Whitted third. 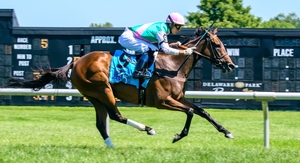 Capla Temptress The final time was 1:44.35 on a course rated firm.

Capla Temptress, who late last year won the G3 My Charmer Stakes at Gulfstream Park, is trained by Bill Mott, and his assistant, Neil Poznansky, was on hand at Delaware Park.

“She has been running in good company and came into the race training really good,” he said. “Jose did a great job getting her covered up.”

“It was very good trip,” Ortiz said. “The main thing was to cover her up early. She relaxed, was comfortable, and was handling the ground well. When I asked her she responded.”

There are now four tied at the top of the division standings, each with 10 points, after the third round: Capla Temptress, Enchanter Ghost, Secret Message and Dynatail, who was entered in the Just a Kiss but scratched.

THE $100,000 Hockessin Stakes for 3-Year-Olds and Up, Sprint—Dirt Division at six furlongs had the potential for a speed duel, but it didn’t materialize.

Altissimo Nancy Lavrich and Robert Zielinski’s 6-year-old Ohio-bred Altissimo quickly took the lead and expanded it in the lane to win by 5 ½ lengths over favored No Dozing, owned by Lael Stable, and Always Sunshine, who won the Hockessin last year, finished third. The final time was 1:09.31.

He shipped to Delaware from Thistledown Racino, where is based, but previously won a 1 1/16-mile state-bred stakes on the grass at Belterra Park near Cincinnati.

“We focused on the races in Ohio this year, but there are gaps in the schedule, so we looked for something between the Ohio stakes,” Richard Zielinski said. “This was one of them. There is one in August but then not another one until October, so it’s possible Altissimo could return.”

“He’s a very nice horse,” said Altissimo’s rider, Christian Pilares. “I’m very confident when I ride him, and Richie has trained him well.”

The division leader remains Laki, who didn’t race at Delaware Park, with 13 points. Altissimo and Midtowncharlybrown are tied each with 10.

ORTIZ GOT his third MATCH Series win of the afternoon with Parlor in the $100,000 Glasgow Stakes for  3-Year-Olds and Up, Sprint—Turf Division, at 7 ½ furlongs.

Parlor Owned by Anderson Stables, Parlor shipped from Churchill Downs to get his first victory since May 2018 in Kentucky.

Five-year-old Parlor, the heavy favorite, rated in fourth early, snuck up the rail in the stretch and won by a length over Abiding Star, who led for most of the way. Paret was third, and the final time was 1:31.17.

The winner is trained by Eddie Keannelly. Plans for the gelding will be firmed up after he returns to Churchill Downs.

Completed Pass, the division leader with 15 points, broke slowly and failed to mount a rally in the Glasgow but did, however, qualify for MATCH Series bonus money with his third series start.