NASHVILLE, Tenn.--Jack Fisher had been in a bit of a rut - training three winners at steeplechase meets for three weeks in a row at Middleburg, the Queens Cup and the Gold Cup.

Most trainers would be delighted to be in that rut, but not Fisher - so he broke out of that rut at Iroquois on May 11 by saddling FOUR winners including last year's Eclipse Award winner Scorpiancer to win the $150,000 G1 Calvin Houghland Iroquois Hurdle Stakes. 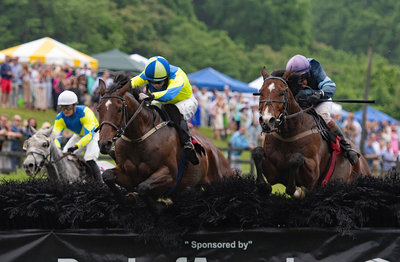 Bruton Street-US' Scorpiancer, ridden by Sean McDermott, won the 3 mile Calvin Houghland for the second year in a row, but this year he really had to fight for it,

Wendy Hendriks' Surprising Soul, trained by her son Ricky and ridden by Ross Geraghty, battled valiantly through the stretch but was finally edged out by Scorpaincer, who won by a length in 5:43:3/5.

"I was delighted with Surprising Soul," said Ricky Hendriks. "He ran really well. He'll have the summer off now."

"Scorpiancer bowed after last year's race, but not badly," said Fisher. "We had him back ready to run in the fall, but the vets said to wait a while."

The Iroquois was Scorpiancer's second race since winning in Nashville last spring, as he had run in the Temple Gwathmey at Middleburg on April 20, where he was pulled up before the finish.

"WHEN HE ran at Middleburg, I didn't expect him to win, but I did expect him to finish," said Fisher. He said his not finishing was a disappointment.

"He'll have the summer off and then run probably at Belmont (in the Lonesome Glory)," said Fisher.

Fisher said that Schoodic had been a nice enough hurdle horse but not a super star, so they had decided to switch him to timber.

Previously campaigned by his breeder, Edith R. Dixon, Scoodic had run in hurdle stakes, winning three times, first in a novice stakes at Saratoga in 2014, then at Radnor in 2016 and at Great Meadow in 2017, but usually running mid-pack.

Bought this year by Mrs. Fisher and switched to timber, Schoodic won his first start at My Lady's Manor in the John Rush Maiden Special Weight and now has won his second start, this in a stakes at Iroquois.

"The strategy was to get him galloping and jumping," said Frost. "I spoke to the people who rode him as a 2-year-old, and they said when you're on the way out to the field he asks, `How fast do you want me to go.' Jack said he's been hunting him this past winter, and he was carried along. I'm please for everyone, especially Schoodic, as he likes to win."

Riverdee Stable's City Dreamer (Ire), ridden by McDermott, won the $100,000 Marcellus Frost  Champion Hurdle, a novice hurdle stakes at 2 1/4 miles, by a neck in 4:23 over Help from Heaven, trained by Kate Dalton.

"That was a surprise to me," said Fisher. "I thought he'd finish fifth or sixth."

"He was flying at the end," said McDermott. "I rode him at Queen's Cup. Then I had him out a few times to teach him to relax. Jack's horses are very fit."

Fisher has 30 horses in his barn, almost all of which win with great regularity.

Fisher's fourth win was in the $35,000 Bright Hour Ratings Handicap hurdle at 3 miles with Bruton Street-US' Lord Justice (Ire), ridden by Mike Mitchell, who won by 4 lengths in 5:50:3/5 over Rosbrian Farm's Stooshie.

Fisher said that Lord Justice had had a breathing problem, but they couldn't figure out exactly what it was, so they gave him last fall off.

"When he came back this spring at the Queens Cup he went to the front, and he didn't like it," said Fisher. "We let him drop back in this race."

SHEPPARD trained the winner of the first race on the card, the $50,000, 2 1/4 mile Green Pastures Allowance Hurdle, Sportswear (GB), who was ridden by Gerard Galligan to a 1/2 length victory in 4:18 over Whitman's Poetry, trained by Fisher.

As Sheppard was not at the races, out with a bad cold, assistant trainer Keri Brion saddled Sportswear, who is by Frankel, a top hurdle sire who stands in England..

Sportswear had been running unsuccessfully on the flat and was in the 2018 Keeneland November sale, where he was sold for $30,000.

"Joe Miller picked him out for us," said Brion. "A couple of others bid on  him, but we got him, and now he's had two back-to-back wins."

"His breeding is top class," said Galligan. "I've ridden him twice and won twice, and I haven't given him a tap of the stick yet. He's a good jumper."

"I rode her at Camden against the boys, and she was fourth," said Sinnott. "She was pretty impressive today."

"The weather plays a past," said Brion. "She loves this going. She looked a winner all the way. She was in Camden with our new trainer, and he did a great job of getting her ready."

"Gordon Elliot has been a close friend and trainer for me for 15 years," said Mahoney. "He's been very helpful in finding nice horses for me. I bought this horse with the Half Married Syndicate, and they're going to stay partners with me until the end of the year. We had such fun together here."

"Gordon brought him over from England for me along with Stooshie, who was second in the handicap," said Mahoney. "They're both going to Ricky (Hendriks) now,"

"I'm very blessed to have Gordon to help me, to push me in the right direction, and to have Ricky here," said Mahoney. "It takes a team to be successful."

"I have the two from Gordon now," said Hendrks the following day at Willowdale. "They're very nice horses, so I'm excited to have them."