AIKEN, S.C.--The Aiken Spring Steeplechase on Saturday, March 23 kicks of the National Steeplechase Association's spring series of races with two flat races and four hurdle races, all of which will be streamed live. 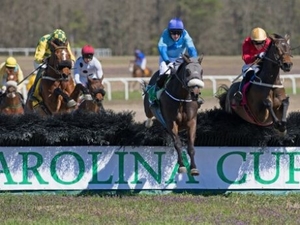 Ricky Hendriks, who lost both the Leading Trainer, Races Won and Money Won titles by a nose to Jack Fisher last year, is starting this season with five entries in the four hurdle races, including Rosbrian Farm's Barhanpour in the $30,000 Imperial Cup, an overnight handicap.

Fisher, who concentrates on the big races later in the year, has nothing entered at Aiken.

The following Saturday, March 30, is the Carolina Cup in Camden, S.C., but there's a change in venue for the April 6 meet.

The Georgia Steeplechase in Kingston, Ga., was originally scheduled for April 6, but the race organizers moved it to the fall because they said an undue amount of rain had made it impossible to hold that meet.

The NSA and the Carolina Cup Racing Association will host “The Cup Runneth Over,” a full program of jump racing offering $90,000 in purses at the Springdale Race Course in Camden, S.C., on Saturday, April 6.

“THE CUP Runneth Over” takes the place on the NSA calendar of the Georgia Steeplechase, which was canceled by its organizers on March 18.

“The Cup Runneth Over” will offer a second consecutive weekend of racing over the historic Springdale course, after the 87th annual Carolina Cup Races on March 30.

“We regret that, after a valiant effort last year, the Georgia Steeplechase could not sustain its position on the NSA calendar,” said NSA President Guy J. Torsilieri. “The Board of Directors and I believe it is vitally important to have a racing opportunity for our horsemen on April 6, and the board agreed to fund the event despite such short notice.

“We are most grateful to the Carolina Cup Racing Association for its willingness to open the Springdale Race Course for a second day of racing and to provide an important opportunity to our horsemen. Working together on a very short timeline, the NSA and the Carolina Cup Racing Association have taken a potentially negative development and turned it into a positive—a new, innovative community event.
“Most if not all of our horsemen have raced on Springdale’s impeccable racing surface, and it is familiar territory to them,” Torsilieri said.

John Cushman, vice chairman of the Carolina Cup Racing Association and the Carolina Cup’s executive director, welcomed the opportunity to showcase jump racing for a second Saturday afternoon in his home community.

“Truly in this case, the Cup runneth over,” he said. “One week after the Carolina Cup, we will stage an event for the entire Camden community while supporting our steeplechase horsemen,” he said.

“Camden is horse country, and it is the longtime Southern home of steeplechase racing. Our community strongly supports the Carolina Cup, and we will devise an attractive guest package to welcome our fans back to Springdale for a second afternoon of spring racing.”

Bill Gallo Jr., the NSA’s director of racing, said the racing program will closely approximate the proposed racing card at the Georgia Steeplechase so that horsemen can continue their preparations without undue adjustments to training schedules.