With breeder's rewards money ensured, Pa-breds have a rosy future

Pa-breds enjoyed a great year last year, and in future years, they may do even better as breeders are now ensured of Pennsylvania's lucrative Breeder's Awards. 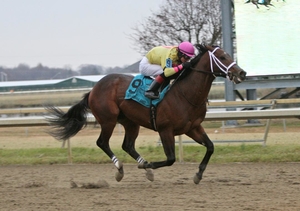 With Breeder's Awards now almost guaranteed to remain at their present level, the leaders of the Pennsylvania Thoroughbred breeding industry believe the best is yet to come.

For a while, breeding in Pennsylvania became a dicey proposition as breeders worried that between the time the horse was foaled and when it hit the races, it could be running for substantially lower purses and breeder awards.

With Corbett voted out of office, leaders from the horsemen's and breeders groups were, in 2017, able to convince Pennsylvania politicians that they were creating serious problems for the sport and to agree to put the Race Horse Development money, which comes from slot machine revenues, into a trust.

While the state can still take money out of the trust, if it does so, the penalties are so significant that there is virtually no way politicians would be inclined to take back any of the money.

Both on the racing and breeding ends of the sport, Pennsylvania has perhaps the most lucrative bonus structure in the entire industry.

The Pennsylvania breeding program paid out more than $30 million in bonuses in 2018, making it the richest program in the Mid-Atlantic region.

"Now that the fund is protected, it presents a great opportunity for breeders," said Donny Brown, a longtime owner and breeder and managing partner for Warrior's Reward, who stands his first season in Pennsylvania at Wyn Oaks Farm. "The state of Pennsylvania has the best regional breeding program, and going forward, there's no better time to invest in a broodmare. With a Pennsylvania-bred, you can earn a lot of money, and things are headed in the right direction."

The number of mares bred in the state in 2018 was 628, and projections are that the number will continue to rise for many years.

As many as 10 new stallions have taken up residence in Pennsylvania, including multiple GI winner and multimillionaire Hoppertunity by Any Given Saturday, graded stakes winner and freshman sire Flashback by Tapit, young stakes-placed Speightstown stallion Eastwood, track-record setter Social Inclusion, a son of Pioneerof the Nile, Dolphus by Lookin At Lucky, a half-brother to champion Rachel Alexandra and graded stakes winner Airoforce by Colonel John .

Those are among the reasons breeder Hank Nothhaft has moved the majority of his mares from California to Pennsylvania. He bred 2017 Filly & Mare sprint champion Finest City (City Zip) in Pennsylvania, but was wary about continuing to breed in the state.

"I was breeding in California and over time I realized it's a hyper-competitive market there," he said. "The financial rewards are not commensurate with what it takes to win out there. It's my opinion that given the quality of racing, the competitiveness of the racing versus what you see in New York or California, plus the breeders awards, the typical guy like me off the street can breed a horse with a reasonable expectation of being rewarded financially. At Parx, they run for terrific purses plus bonus money in open company and you can also wind up breeding a higher end horse here, like Finest City. "The problem with Pennsylvania was there was always too much uncertainty. That's gone. I think this year will prove to be a breakthrough year. The word has gotten around."