By Laura Hillenbrand with editing 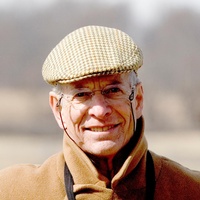 He attended the Stuyvesant School in Warrenton, Va., then St. Paul’s School in Concord, N.H., from which he graduated in 1949 and went on to Harvard University, where he earned his bachelor of arts in 1953.

HE WAS the first large animal intern at the UPenn School of Veterinary Medicine, where he taught for seven years.

In 1967 he founded the Delaware Equine Center in Glasgow, Del., with partners Lawrence Cushing and Daniel Marks.

With Dr. Marks, Dr. Mackay-Smith pioneered a host of surgical and diagnostic procedures that remain standard in the field, including the now universally-used “tie back” procedure for the common equine respiratory disorder laryngeal hemiplegia.

Drs. Marks and Mackay-Smith were also the first to use a rigid endoscope to film the workings of the equine larynx, a major breakthrough in diagnostics.

Mackay-Smith was an institution on country roads, motoring between his clients’ barns in a battered BMW on which he put 500,000 miles, driving it to such a state of exhaustion that his mechanic refused to let him use it anymore, “lest a front wheel part company with the axle,” wrote Mackay-Smith’s wife, Winkie.

Between 1961 and 2001, Dr. Mackay-Smith was the author/co-author of 22 professional papers and lectured widely on a host of equine veterinary subjects.

He joined the American Association of Equine Practitioners in 1961 and served on the organization’s Ethics, Racetrack, Education, Prepurchase, and Farrier Liaison committees.

An avid foxhunter from the age of 8, Dr. Mackay-Smith hunted principally with Virginia’s Blue Ridge and Pennsylvania’s Cheshire hounds for72 years, interspersing his local rides with hunting excursions to England and Scotland.

HIS PASSION for competitive endurance riding began in 1964, when he entered the Western States Trail Ride, popularly known as the Tevis Cup, a single-day 100-mile event known as the grand-daddy of endurance races.

Riding a borrowed horse, he placed fifth, a remarkable result for an intensely grueling event in which nearly half of the 53 competitors failed to finish. In

1995 he became the first rider to win both the Old Dominion 100 on Virginia and the Tevis Cup 100 in California on the same horse in the same year, just six weeks apart.

In an endurance riding career that spanned more than three decades, he introduced a host of innovations to protect the welfare of the equine competitors, changes embraced by the American Endurance Ride Conference, for which he was a board member and onetime president, and the International Federation for Equestrian Sports.

While foxhunting with his father as a boy, Mackay-Smith learned to recognize the traces of old colonial roads over which they galloped.

Upon his retirement, Dr. Mackay-Smith launched a project to identify and map those colonial roads in Clarke County, Va,, an early site of colonial farming and industry and the seat of Lord Fairfax, a fellow avid fox hunter.

Discovering that newly-fallen snow revealed centuries-old road ruts most clearly, he did most of his work in winter, walking the fields and following the snow shadows that marked the old byways.

In recognition of his achievement, he was made “Historian Laureate” by the Clarke County Historic Association in 2011.

At his 50th class reunion at the University of Georgia in 2008, Dr. Mackay-Smith was honored as Veterinarian of the Year.

Dr. Mackay-Smith was a member of Meade Memorial Church in White Post.