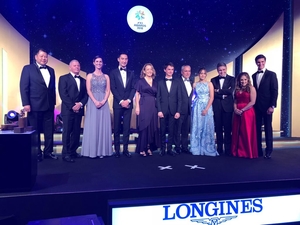 The FEI Best Groom Award spotlights the individual working behind the scenes to ensure the best possible care for the horse.

The general-public and an expert panel determined the award winners, each accounting for 50 percent of the vote.

“Winning the best groom award is a huge honor because it was a vote by my peers, and other great horsemen, because it was a vote and not being picked," said McKeever. "I want to thank everyone for voting. It feels great. There have have been so many moments, so many great horses and just the opportunity yo be a part of their lives, the opportunity to travel to shows, and just the lifestyle. This has never been a job, it's a way  of life and I’ve always woken up wanting to go to work. Every day is never the same, it’s always been very interesting. Every horse is an individual. There’s no set way, and I’m always learning. I’m lucky to be around them.”

McKEEVER has served as Ward’s groom and barn manager for over 30 years.

"We're more like brothers," said McKeever. "We kind of grew up together. It's grown into a good partnership."

During the years, he has overseen Ward’s support team and traveled to major world-class competitions, such as the Olympic Games, Pan American Games, FEI World Equestrian Games and FEI Jumping World Cup Finals.

He has been the backbone behind Ward’s monumental career, responsible for the care, well-being, and preparation for Ward’s prized equine partners.

“He knows the horses better than anybody," said Ward in a FEI Awards tribute video to McKeever. "He knows how to deal with injuries, how to prevent injuries. There’s never been a moment where I doubted that my horses were in the best of care and at the best preparation to compete. It’s great to see how over the years he has become a mentor to other grooms as well as barn managers and even riders. I see a constant flow, when we are at events, of people asking Lee ‘What do I do for this? How do I handle that?’ It shows the respect level throughout the entire sport that Lee has, and it has all been earned through a lot of hard work.”