FAIR HILL, Md--Following the U.S. Eventing team's eighth place finish at the World Equestrian Games in Tryon, The Horse published an article about the Eventing Team's dominance in the sport for 40 years from the Tokyo Olympics in 1964 to 2008 and then the team's dismal results in the past 10 years when twice in championships the U.S. failed to finish a team and other times failed to even finish high enough to qualify for the Olympics. 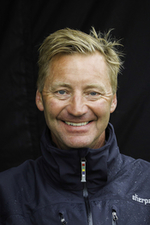 Erik DuvanderIn October, 2017, the U.S. Equestrian Federation hired Erik Duvander as the new Performance Director for Eventing, and he has been working with riders for the past 10 months.

Duvander has definite ideas on what is needed to improve eventing in the U.S., and he has the resume to accomplish improvement.

As a rider, Duvander competed for Sweden at World Championship and Olympic levels.

He turned to coaching after his riding career and has worked with Japanese, Swedish and New Zealand eventing teams and has coached teams and individuals to WEG and Olympic medals, including most recently leading the New Zealand team to a fourth place finish at the 2018 Rio Olympics.

During an interviews at Fair Hill on Oct. 21, Duvander said that he was familiar with the dominance and then downfall of U.S. team over the past 50 years as he is a student of eventing.

He acknowledged that his is a difficult job given the present state of evening in this country.

"WHY EVENTING teams were so good and then fared so badly over the past 10 year is an almost impossible question to answer, as I wasn't a part of all that," said Duvander. "My only real insight has been the past 10 months."

Duvander said there are many different factors that go into making good event riders and teams.

"So many of the people that I have worked with have come from nothing," he said. "It's determination that gets them there. Its about their internal drive."

"I'm a great believer in the environment around a rider," said Duvander. "Everybody needs a mentor."

"You can make a rider a good rider, but you can't make a rider a great rider," said Duvander, pointing out that only that individual rider can become great by the inner drive.

"It's about finding those riders that have that inner drive, even if they don't have horses," said Duvander. "We also need to find riders who are developing a constant flow of horses. A rider's goal has to be to win a gold medal. Riders have to be in it for the long haul."

"It's not a good place where we are now," he said. "We're not in the top four teams in the world. We have to select the right people and work with them."