UNIONVILLE, Pa--Russell B. Jones of Unionville was inducted into the Parx Hall of Fame at Parx on Sept. 15. 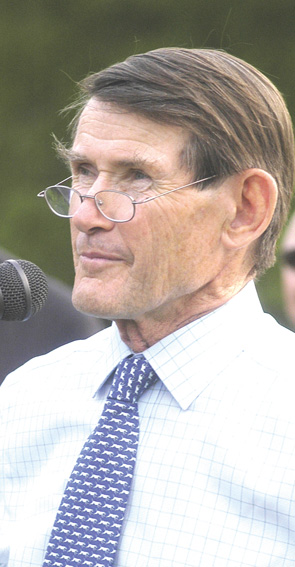 Jones has been  a breeder in Pennsylvania, currently buys at auction in this country for horses to race in Europe, has served on racing commissions and ran one of the biggest bloodstock agencies in the country.

"I've been a breeder in the state for, it must be 40 some years," said Jones.

He currently sits on the Pennsylvania State Horse Racing Commission.

"I was the head of the Pennsylvania Horse Breeders Association at one point," said Jones. "I was on a prior racing commission."

My brother and I ran what was the biggest consignment agency (Walnut Green) outside the state of Kentucky," said Jones. "Now I'm retired, and that has to be the biggest chapter of all."

Actually, Jones is semi-retired, as he finds time to advise his cousin-in-law and good friend Phyllis Wyeth on matters involving her hot young sire Union Rags, winner of the 2012 Belmont Stakes.

"It's been thrilling," said Jones. It's been a lifetime experience. Great horse, great lady, may it  last."

He didn't get his first win until his 13th start and then became a winning machine with incredible consistency.

"Watching him come down the stretch, head down and ears back, just pure grit and determination, man, I'm going to miss it," said Bryant.

GOVERNOR RENDELL was critical in getting gaming enacted in Pennsylvania in 20014.

"One of the many reasons I got behind expanded gaming is because the horse racing industry is such a giant job producer in the Commonwealth," said the governor.

DR. HOGAN has had a long career but is most widely known for her treatment of the then 2-year-old Smarty Jones when he suffered a severe head injury in a freak accident.

She has been instrumental in Parx decade old racehorse retirement program. the PTHA's Turning for Home, Inc.

VEGA, a teenager in 1980 when the U.S. border was opened to Cuban residents. immigrated to the U.S. and ended up on a refuge camp near Penn National, and the excitement of the track lured him.

He made his way to what was then called Keystone Racetrack in 1984 and never left.