Medal winner Luke Jensen and Jamaica, then and now

Jamaica~ then and now ⁣was posted on Facebook by John Brennan and Missy Clark of North Run.

This is an incredible story and makes Jensen's win in the Hunter Seat Medal Finals all the more impressive. 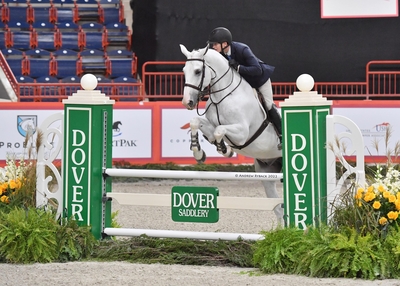 Luke Jensen on Jamaica winning the Medal Finals (Photo by Andrew Ryback Photography)JJ  AMAICA was sent to us by Stephex Stables to sell as a jumper during the winter of 2020.

Tomi Yofre, our rider at the time, showed him at WEF.

Tomi had success with Jamaica in the 1.40/ 1.45 divisions, but by the end of WEF we hadn’t gotten the horse sold, so he went back to Stephex.

Shortly after WEF 2020 ended, he was sold to Mexico.

Jamaica and his new rider weren’t a match so in October of 2020 they asked if they could return Jamaica back to Stephex.

Stephan Conter called us and asked if we could take the horse since he’d be shipping into the US from Mexico.

We of course said yes. ⁣

He was beyond skinny and even had a number on his back for unknown reasons.

To say we were all shocked⁣ and upset was an understatement.

WE SENT photos to Stephan and he couldn’t believe it either.⁣

Not only was Jamaica in incredibly poor condition, he was a different horse from when we had him, as you can well imagine.

You couldn’t get near him in the stall or he’d try to kick or bite you.

We knew he needed time to decompress and get heathy again so we began the slow process of the rehabilitation of Jamaica.⁣

By WEF of 2021, Jamaica looked much better and we thought maybe we should try him as an equitation horse.

Cody Rego showed him a bit in some Eq classes that winter, but it seemed like Jamaica needed more time to relax, so when we returned back to Vermont in April we decided to turn him out for the rest of the summer.

In the fall we slowly started him back into work with the goal of aiming for WEF 2022. ⁣

In January of 2022, Luke began riding Jamaica and taking care of him.

He was still very difficult to work around, but Luke’s incredible patience and thoughtful horsemanship worked wonders with Jamaica, and they began to form a very special relationship.

Slowly but surely, Luke gained the trust of the horse and their special bond began to emerge. ⁣

In March, Luke and Jamaica won the WEF Equitation Championship.

All of Luke’s hard work with the horse was paying off.⁣

He would be Luke’s horse for the rest of the year, no matter what.⁣

The long road these two traveled together to get to where they are today is nothing short of a Cinderella story. ⁣

Our USEF Medal National Championship win at Harrisburg was profound for so many reasons, and we’re incredibly proud of you and our wonderful Jamaica.⁣ 🤍