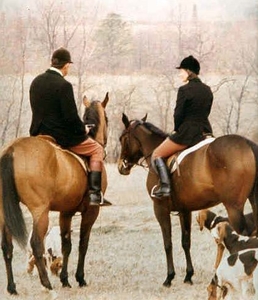 Jack and Nancy out foxhunting on their wedding day (Photo courtesy of Nancy Dougherty)He was the husband of Nancy Lutz Dougherty with whom he shared 43 years of marriage.

Born in West Grove, Pa., he was the son of the late John W., Sr. and Elva McKinney Dougherty.

John was a farmer, builder, stone mason and farrier.

He was a Master and Huntsman of the Lewisville Hunt since the age of 16.

Nancy and Jack Dougherty were married in 1979.

"We shared a great love for horses and hounds," said Nancy when she retired from her job at National Steeplechase Association. "His family had the Lewisville Hunt, generations before him."

“Jack put the pack back together when he was a teenager and hunted the hounds up until a few years ago when his health deteriorated," she said.

Lewsiville kept 30-40 couple and half a dozen field hunters when the private pack was most active in the old Foxcatcher Hunt territory.

“I like to think we had the best years of hunting,” Dougherty said, open fixtures and lots of sport. Today's hunting is increasingly limited by development.

“FOXHUNTING has always been in my blood," said Nancy of her natural partnership withJack. "I started hunting at age 11. The only relative who shared that was my great-uncle Charlie, whom I never knew. My mother would tell me that Uncle Charlie on more than one occasion would jump up from the dinner table to turn his hounds out when (he could hear that) neighboring farmers had a chase going.”

A Celebration of Life Service will be held at a later date.

Interment will be private.

On-line condolences may be made at www.elcollinsfuneralhome.com.