WELLINGTON Fla.--Kenneth Kraus, one of the founders of Phelps Sports, died in his home on Tuesday, June 26. 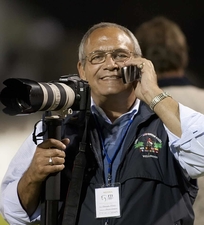 Kenny Kraus (Photo by Debra Jamroz)Kraus was involved in the equestrian industry since 1960,  first as a top junior rider and then as an announcer.

He announced at Devon for many years, and after helping to found Phelps Sports he continued at Devon in the press box, reporting on the winners and photographing them as well.

He was not only a top reporter but also a top photographer.

He was an enthusiastic fan of international jumping competitions and closely followed U.S. teams competing in Europe.

He announced every major horse show in the country including the National Horse Show, the Devon Horse Show and Country Fair, the American Invitational and the Winter Equestrian Festival.

PRIOR TO his time as a horse show announcer, Kraus was an on-air personality for four years in the Cleveland, Ohio, radio market and also spent a number of years in rock ‘n’ roll as road manager for Lynyrd Skynyrd and The Outlaws.

A journalist at heart, Kraus was a talented writer, gifted photographer and a significant contributor to equestrian media.

In 2006 he spearheaded the creation of Phelps Sports, one of the country’s leading equestrian news organizations.

Kraus reported on and covered all of the major horse shows as well as did investigative reporting and conducted in-depth interviews with top personalities in the industry.

Suffering from a heart condition as well as a number of other ailments, he retired from his position at Phelps Sports in 2017.

“Kenny was a great friend and talented visionary with a passion for equestrian sport,” said Phelps. “It was an honor to work by his side for so many years at Phelps Media Group, and he will truly be missed.”

Kraus is survived by his sister, Wendy Lewis.

As of the printing of this release, no details about memorial arrangements are known.