PHILADELPHIA, Pa.--Recently, Work to Ride (WTR), a nonprofit organization that provides horsemanship education and equine sports training to youth from under-resourced communities, hosted a groundbreaking ceremony and launched the public phase of its $8 million capital campaign to renovate The Chamounix Equestrian Center in Fairmount Park. 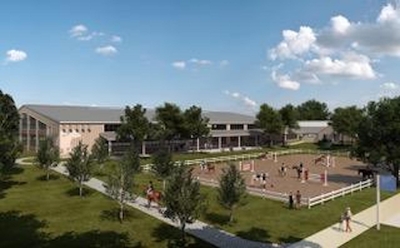 The arena is expected to be complete by 2023.

“The Work to Ride barn has been a home away from home for young people from nearby dense urban communities for nearly 30 years," said Lezlie Hiner, WTR Founder & Executive Director, "These young men and women are an inspiration every day. The proposed indoor arena and renovations will allow us to expand our program to reach even more young people and transform more lives.”

“On behalf of Mayor Jim Kenney and the Commissioner of Recreation, Kathryn Ott Lovell, we are grateful to have the Work to Ride program," said Philadelphia Councilman Curtis Jones, Jr. who attended the groundbreaking event. "I’ve been able to attend a polo match and saw how lifechanging it can be for people who sometimes don’t get to leave 10 square blocks from their house. If you are able to travel and see the world, it changes you forever as you realize that the world is a much smaller place. You actually have more in common than you ever thought possible.”

WORK TO RIDE is one of only a handful of programs throughout the country that use equine sports to improve the life prospects and outcomes of urban youth.

Recent success stories include Daymar Rosser, who with his teammates at Roger Williams University, won the 2017 United States Polo Association’s National Intercollegiate Championship; and 2016 graduate Shariah Harris, who received a scholarship to Cornell University and in 2017 became the first African American woman to play 20-goal polo.

“Everyone who has been through this program has been successful, said Harris, who attributed much of her success to the Work to Ride program. "The program teaches you how to live life, get along with others, develop a positive work ethic and fall in love with horses.”

Kareem Rosser, a board member and alumnus of Work to Ride has been vocal about the impact WTR has had on the trajectory of his life

“This program is absolutely life-changing,” Rosser said, “Students who participate not only grow as athletes but develop life skills and learn life lessons that follow them into adulthood.”

Now a financial analyst, Rosser participated in Work to Ride as a young boy and used the skills he acquired to become 2015 Polo Training Foundation Male Intercollegiate Polo Player of the Year.

He tells the story of his remarkable polo journey in his recently published memoir, Crossing the Line: A Fearless Team of Brothers and the Sport that Changed Their Lives Forever.

The McCausland Foundation is one of several leadership donors to the project.

Student participants work to clean and maintain the stables and care for the horses in exchange for lessons in various equine sports, of which polo is a perennial favorite.

WTR made history when three of its polo players became the first all-African American team to win the United States Polo Association’s National Interscholastic Championship in 2011.

Work to Ride is a 501(c)3 nonprofit organization that provides constructive activities centered on horsemanship, equine sports, and education to under-resourced youth from ages 7 to 18 years-old while creating positive outcomes for student participants since 1994.

The program is housed at Chamounix Stables, located in Fairmount Park, Philadelphia.

In addition to the Work to Ride program, Chamounix Equestrian Center engages the community at large through various equestrian programs; including horseback riding lessons, summer camp, discovery days and polo program. For information about Work to Ride, or to make a donation, go to www.worktoride.net.