Sports betting has already begun in Delaware and New Jersey, and in both of those states that betting will benefit horsemen. 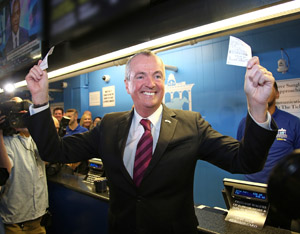 Gov. Phil MurphyIn both Delaware and New Jersey, officials had been working for years not only to get sports betting but also to have it benefit horsemen.

As the only two states that have been working on getting horsemen a portion of the sports betting dollar, they will probably be the only states in which horsemen will ever benefit.

In Delaware, the horse industry is the fourth largest industry in the state, and horsemen will now receive 9.6 percent of the net revenue from sports betting.

And Delaware has already seen some pretty big days in the volume of sports betting during its first week,but The Horse was unable to find out how much was bet in the first week.

Gov. Phil Murphy officially launched sports betting in New Jersey on Thursday morning, June 14, at  at Monmouth Park when he placed a $20 bet.

At the annual meeting of the Pennsylvania Horse Breeders Association on May 23, President Roger Legg said that sports betting in the state could have an adverse affect on horse racing.

"Sports betting will affect the para-mutual handle at race tracks," said Dr. William J. Solomon, who owns Pin Oak Lane Farm, for over 45 years the leading stud farm in Pennsylvania. "Maybe not to soon, but it will."

"THE PERSON with $100 to bet will probably feel he knows more about the Eagles than he knows about the sixth race at Parx," said Solomon. "There will still be the die-hard horse racing betters, but the casual better will bet on other sports."

When the Pennsylvania legislature passed its own sports betting act, it also provided for 10 more small casinos throughout the state," Solomon said. "All those things will affect the handle at racetracks."

"In Delaware, the horse industry gets nine percent of the gross profit," Solomon said. "They've been at it for a week, so we'll soon seen how they are doing."

"Ever since the spring of 2014, everything that has happened was expected," said Solomon. "The racing industry gets $235 million from slots now. In the last budget, the legislature put in a rule putting the horse industry's take in trust (meaning that the legislature amended the act so that the state cannot take more than $30 million). But if the state needs more money, all it has to do is change the law."

Pennsylvania takes 36 percent of the sports bets, and the casinos are trying to get the state to reopen the law to get the state's takeout reduced, but as of now that seems unlikely.

"With Pennsylvania taking 36 percent, 34 percent to the state and two percent to the local community, if I've been betting offshore at a lower takeout rate, I'd probably continue," said Solomon.

Dr. Solomon also said that he feels the PHBA has to change its rules defining a Pa-bred in order to have more mares bred in the state.

"There are only about 500 mares a year being bred in Pennsylvania now, while before slots came in there were 1,000," said Solomon. There are three reasons for that; one, there's been a steep decline in the number of foals being bred throughout the country; two, when breeding to a Pennsylvania stallion, you only get 40 percent. They should have been more focused towards Pa.-breds being Pa-sired. Until they reward horses bred by stallions in the state you won't get more mares bred in Pennsylvania.; and three, Pennsylvania racing doesn't have a very good reputation. People don't like to race here because of corruption."

Pannsylvania Farms could also lose some boarding fees as Delaware allows a horse bred in any state to become Delaware-certified by spending three consecutive months in Delaware before the endof March of its 2-year-old year, and with Delaware breeding bonuses sure to go up, some Pa-bred owners may take advantage of that.

THERE IS  a press release on the onset of sports betting in New Jersey on Monmoth Park's website.

"Gov. Phil Murphy officially launched sports betting in New Jersey on Thursday morning, June 14, at  at Monmouth Park when he placed $20 on Germany to capture the World Cup and a $20 future bet on the New Jersey Devils to win the 2019 Stanley Cup.

Flanked by Dennis Drazin, chairman and CEO of Darby Development LLC, operators of Monmouth Park, former state senator Raymond Lesniak, Assembly Speaker Craig Coughlin, and Joe Asher, CEO of William Hill U.S., Gov. Murphy placed his wagers with teller Quinton Harris at 10:38 a.m. Nearly 1,000 patrons then made their way to the 15 designated sports betting tellers in the grandstand to place wagers on a variety of sports and proposition bets available.

Another six tellers took sports bets in the William Hill Race and Sports Bar as Monmouth Park celebrated the long-awaited start of legalized sports betting in the state with a flourish.

“It’s a historic day for Monmouth Park and for the state of New Jersey,” said Drazin. “We’ve been fighting this fight for more than six years in the courts and now that this day has arrived, and judging by the response from the fans who turned out for this, it’s exciting. Clearly, it’s something the people of New Jersey have been waiting for.”

Live racing is conducted on Saturdays and Sundays in the month of June.

Gov. Murphy was able to get favored Germany at 7-2 odds to win the World Cup and the Devils at 40-1 to win the Stanley Cup.

Those wagers closed the chapter on Monmouth Park’s nearly seven-year court battle to make sports betting legal in the face of staunch opposition from professional sports leagues and college sports.

The U.S. Supreme Court sided with Monmouth Park last month in ruling that declared a ban on pro and college sports wagering unconstitutional.

Drazin said he was not surprised by the large turnout for the first day of sports wagering, saying “I always thought it would be well received.”

“The only surprise to me is after the Governor made his bets and Ray Lesniak made his bets that we were engulfed by a sea of people looking to bet,” he said. “It was a wonderful sight.”