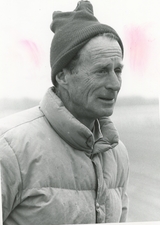 Gene Weymouth at Fair Hill Training Center in 1990 (Photo by Jeff Brown)Weymouth won the Maryland Hunt Cup as a jockey on Ned’s Flying in 1957 and also captured the historic timber race as a trainer when Burnmac won in 1974.

He attended A.I. du Pont School and Westtown School, and after graduating from the McDonough Military Academy in 1951 he attended the University of Wisconsin.

Born into a family that loved horses, Weymouth’s began riding at a young age and competed at the Devon Horse Show as a child, but he soon set his sights on steeplechase racing, later becoming one of the top amateur steeplechase jockeys of his time.

Some of his career highlights as a jockey include winning the Monmouth Hunt Cup, the New Jersey Hunt Cup and the Maryland Hunt Cup.

IN 1952, he had the opportunity to ride in the English Grand National in Aintree, England on a horse named Possible, but, although he did not finish, Weymouth always counted that as one of his most memorable experiences.

He also won the Pennsylvania Hunt Cup and years later allowed the race to be run on his farm in Kennett Square.

At the encouragement of his father, he went off to work as a stockbroker for a brief period, but he soon returned to training.

From 1984 until his retirement in 2010, he trained horses at the Fair Hill Training Center in Maryland, where he was one of the original investors, working side by side with his employees from early mornings until late evenings.

From his base at Fair Hill, Weymouth’s stable developed into a force in the Mid-Atlantic with dozens of wins through the 1990s.

His top horses included stakes winner After The Glitter, a homebred daughter of Screen King, and his mare Jane G, who earned $456,000 and won 17 races.

Bristling won 11 races and earned $386,000, and at odds of 35-1, the homebred finished second to future sire Elusive Quality in the G3 Jaipur Handicap at Belmont Park in 1998.

Weymouth ran Colonial Secretary in the 1995 Belmont Stakes for owner Buckland Farm, but he would have preferred a race at Delaware Park, as Colonial Secretary finished ninth at 52-1, but he rebounded to win three times the next year and finish his career (with Weymouth and other trainers) with 22 wins.

Weymouth retired from training in 2010, and spent several winters in Florida and North Carolina, watching sunsets and reading the newspaper.

He looked forward to visits with his sons and was a proud grandfather.

He enjoyed watching football, betting with friends and traveling with his wife, Cindy and his four-legged friend Huey.

Weymouth was preceded in death by his son, George Tyler Weymouth, his brother, George A. “Frolic” Weymouth, and Trinda Hope Weymouth.

He is also survived by his sister, Patricia Bradford Hobbs, six nieces and nephews, and his former wife, Betty Shaw Weymouth.

Services and interment are private.

In lieu of flowers, donations can be sent to The Steeplechase Fund, c/o the National Steeplechase Association, 400 Fair Hill Drive, Elkton, MD 21921.