FAIR HILL, Md.--Complaints have come in from all sides, eventers, trainers and administrators,  concerning the new facilities at Fair Hill, which include a turf track, three competition rings and a cross country course for eventing, all in front of the permanent grandstand. 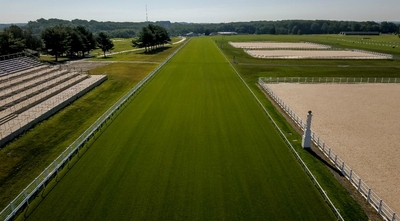 Fair Hill turf trackComplaints include the length of time it has taken to develop the facility, cost overruns and the inability to use the three competition rings inside the turf track.

According to Sam Ray, the Director of Strategic Partnerships at the Maryland Department of Natural Resources, most of the problems stem from Covid and the shut down of business everywhere that it caused.

"After the pandemic shut everything down, you couldn't buy anything," said Ray. "Try to buy a tractor or a gator. You couldn't buy mats. Everything is on back order. Even if you plan six months in advance, you can't get everything."

THERE WAS a low level event held at Fair Hill in early August, and competitors couldn't use the three competition rings for dressage or stadium jumping because to get to the rings competitors would have had to cross the turf track, which won't be ready for use this year.

That caused some to worry that those rings wouldn't be available for the 5 star Maryland three day event to be held in October.

Not so, said Ray, who said the three competition rings will be used for that Event.

"We will put down Enkomats in front of the rings for spectators to cross over, and Enkomats in the back for horses to cross over," said Ray. "After the event, we'll take the turf out where the mats were and resod that area. We have already contacted the turf farm.

"Everybody thinks they know something, but I'm the only person doing this," said Ray. "If they didn't talk to me, they don't have the correct information."

There are those who say that it is just that attitude that is part of the problem, and that this is just another case of government failing where private business succeeds.

Ray said that each faction has it's own agenda, and that they don't take into consideration the needs or wants of other factions.

"This is a very expensive turf track," said Ra, pointing out that It takes one or two years for the grass roots to be strong enough to withstand use, for the root system to be strong.

"We want this to be a good venue for racing and to be safe for racing," said Ray. "This is a sand based track, and we don't want it to be compacted. We're trying to figure out how to have the best horse crossing section. There's no expertise when it comes to this. We're still learning how to maintain the turf track."

There are those who believe there are, in fact, experts in building turf tracks and in constructing crossings, as there are 66 turf tracks in England, 60 of them with infields, and that when the facility was being planned, not all problems, like turf crossings, were considered nor was all expertise used.

"This is a very expensive medium to maintain," said Ray.

There have been estimates on the upkeep of the turf track, some of them astronomical, such a $900.000 a year.

"I can't give you a figure on the cost of the upkeep," said Ray. "It depends on how much use the track gets."

"The first time the turf track will be used for racing will be the Fair Hill Races over Memorial weekend of next year," said Ray. "Initially, we'll have two race meets a year, one in the spring and one in the fall.W e have permission for eight days of racing a year."

Ray said how many of those days they used would depend on a number of things, including whether it would be best to have just two very good race meets a year.

"The linchpin was that Covid resulted in unforeseen obstacles," said Ray. "We'll get where we need to be this year. We're building something great for racing and for eventing, but safety is paramount for us."