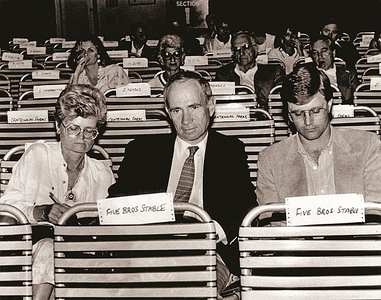 Notonly was he an accomplished equestrian in his own right, he passed his love of horses and his ability to his children, particularly Matthew and Alison.

Alison Robitaiile rode on 25 Nations Cup team, was the top-placed U.S. rider at the 1998 World Equestrian Games in Rome, Italy, was part of the silver medal-winning U.S. Team at the 1999 Pan American Games in Winnipeg, Canada, and named the first alternate for the 2004 Olympic Games in Athens, Greece.

"I think horses were everything in his life," said Firestone's son, Matthew.

Both Bert and Diana Firestone were avid show jumpers and hunted in Virginia with the Piedmont and Middleburg Hunts and were Joint-Masters of the Kildare Foxhounds in Ireland.

FIRESTONE attended the New York Military Academy where he was on the jumping team and attended the University of Virginia.

After graduation from college in 1954, he worked for a New York brokerage firm and then formed Firestone Properties, a company that planned, built, and leased commercial and industrial properties.

Honest Pleasure, a $45,000 What a Pleasure colt the Firestones bought at Saratoga who was trained by LeRoy Jolley, was  a G1 winner at 2 and the 1975 champion 2-year-old colt.

At 3, Honest Pleasure won the Flamingo Stakes (G1), Florida Derby (G1), and Blue Grass Stakes (G1) and was second in the Kentucky Derby (G1). He went on to win the Travers Stakes (G1).

In 1980, the Firestones' champion 3-year-old filly Genuine Risk was the second filly to win the Kentucky Derby and finished second in both the Preakness and Belmont Stakes.

Through 2016, the Firestones campaigned 51 graded or group stakes winners, including Theatrical, the 1987 Eclipse champion grass horse.

Firestone owned racetracks for a time, including Calder Race Course and Gulfstream Park.

Firestone is survived by his wife, Diana; his four children, Matt, Greg, Ted and Alison; his three stepchildren, Lorna, Chris and Cricket and several grandchildren.